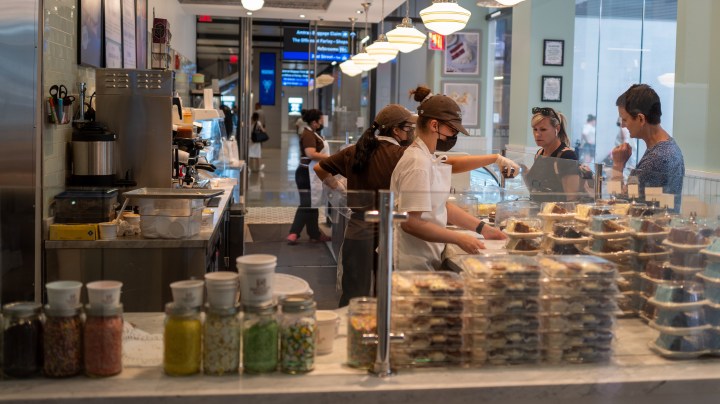 The country’s gross domestic product — the tally of everything bought and sold, borrowed and spent, imported and exported — shrank in the second quarter by 0.9%. And that’s not great. But if you look at the beating heart of this economy, the consumer, we are still spending.

“A lot of the things that have seen a lot of supply chain issues, people are kind of rotating out of that as prices are elevated,” said Justin Weidner, an economist at Deutsche Bank.

Now, did we cut back on goods because we were saving and putting that money away for a rainy day? Not at all. We were just spending on other things: health care, trips, going out to bars — basically catching up on all the things we didn’t do at the start of the pandemic.

“You’re starting to see this normalization of people’s spending habits shifting back from goods, back into services,” Weidner said.

So, when you net it all out and take inflation into account, consumers actually spent about 1% more on everything total in the second quarter — that’s growth.

“One positive point to make from the Q2 report was that yes, consumption growth slowed, but it still increased, whereas mostly overall GDP fell,” said Andrew Hunter, a senior U.S. economist at Capital Economics.

In fact, the main reason why GDP didn’t technically grow in the second quarter is because a bunch of companies bought too many goods we didn’t want. They had to hold off on buying more while their warehouses cleared out, and that showed up in the data.

“In the second quarter, the slowing in pace of inventory subtracted 2% of GDP growth. So, had it not been for that, GDP would have rose,” said Ben Herzon, a senior U.S. economist at S&P Global Market Intelligence.

Herzon predicted GDP will grow 0.9% in the third quarter. But the consumer may not be able to keep saving the day indefinitely. Yeah, we’re spending more on services, but guess what? Services are getting more expensive.

“In June, year-over-year services inflation was 5.5%,” said Deutsche Bank’s Weidner. “We have that rising up to 7% by the end of the year.”

Rents are still rising, eating away at income. Personal disposable income fell 0.5% in the second quarter. Investment in homes fell sharply, and the Fed is still raising rates. We consumers might be the engine of the U.S. economy, but there’s a lot out there to slow us down.