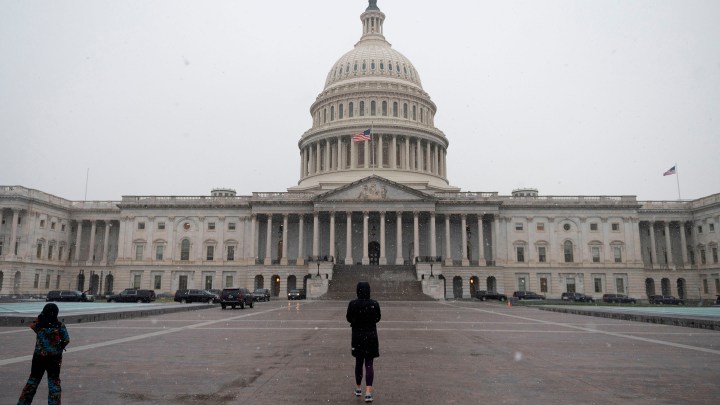 COPY
"What we really need in this package is a bridge to when the weather is warmer and the vaccines are disseminated," says Marc Goldwein, senior vice president and senior policy director for the Committee for a Responsible Federal Budget. Andrew Caballero-Reynolds/AFP via Getty Images
COVID-19

"What we really need in this package is a bridge to when the weather is warmer and the vaccines are disseminated," says Marc Goldwein, senior vice president and senior policy director for the Committee for a Responsible Federal Budget. Andrew Caballero-Reynolds/AFP via Getty Images
Listen Now

Because Republicans and Democrats plan to get back to negotiations Friday, we can’t tell you exactly what is in the $900 billion coronavirus relief package that might or might not coalesce in the coming hours. It won’t address funding for cash-strapped state and local governments or stop business from getting sued over their handling of the virus.

But there would be money sent to people through various routes.

Marc Goldwein, senior vice president and senior policy director for the Committee for a Responsible Federal Budget, spoke with “Marketplace Morning Report” host David Brancaccio about this, and the following is an edited transcript of their conversation.

Marc Goldwein: Well, there are still ongoing negotiations, but it sounds like the [direct payment] checks portion could be $600 a person, $700 per person. The president has been asking for $1,200 to $2,000. But it sounds like the negotiators are closer to that $600 range.

David Brancaccio: And then the feds might top up the state unemployment benefits again, but just not quite at the level they were?

Goldwein: So remember back during the CARES Act, for a period of time, unemployed benefits had an extra $600 a week. That was really quite massive. This time, they’re talking about more like an extra $300 a week.

Brancaccio: And not forever. For 10 weeks, possibly?

Goldwein: First we heard 16 weeks, then we heard 10 weeks. Negotiations are ongoing, but it sounds like into March or possibly into April.

Brancaccio: You think 10 weeks is, what, maybe a little short?

Goldwein: Well, what we really need in this package is a bridge to when the weather is warmer and the vaccines are disseminated. Which, your guess is as good as mine, but I think it’s probably into April or possibly the beginning of May. Not when everyone is vaccinated, but when things are at least going in the right direction in terms of normalizing. And, so yeah, I’m looking for a package that could get us to April or May.