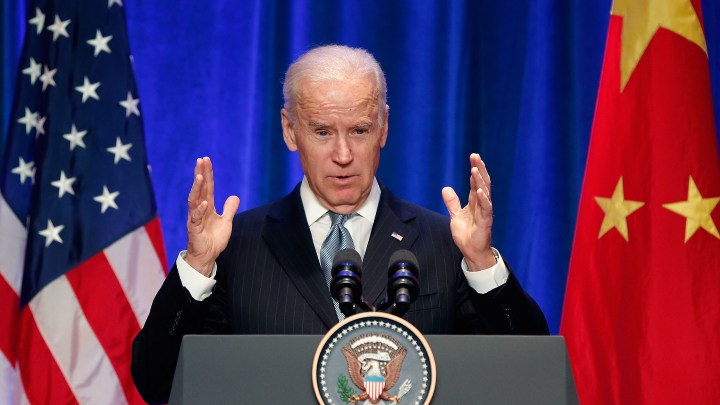 The Electoral College decisively confirmed Joe Biden on Monday as the nation’s next president, ratifying his November victory in an authoritative state-by-state repudiation of President Donald Trump’s refusal to concede he had lost.

This presents another opportunity to look ahead to Biden administration policy — namely the U.S. relationship with China, tariffs and the unresolved issue of Chinese firms using foreign intellectual property.

Dean Baker, senior economist and co-founder of the Center for Economic and Policy Research, spoke about this with Marketplace Morning Report host David Brancaccio. The following is an edited transcript of their conversation.

David Brancaccio: President-elect [Joe] Biden said the other day he’s reviewing China policy and won’t cancel Trump administration tariffs on China right away. Now, Dr. Baker, you’ve never liked the sort of globalization that siphons American jobs away. So are you going to be urging the Biden people to crack down on China?

Dean Baker: Well, I don’t think I’d urge them to crack down in sort of a simple way. I think we need to rethink the relationship. So when we talk about the tariffs, I’ll just say, I couldn’t see any sense in [President] Donald Trump’s tariffs. We were paying the tariffs, which could be OK if there’s a clear goal, [if] we’re trying to get something specific from China, that might be a reasonable tactic. Now, maybe Donald Trump in his secret plans had some specific goal. But I’ll just say, as someone watching it from the outside, it wasn’t all clear to me. So, basically, the tariffs meant we were paying more money. But, anyhow, so we have Biden coming in in January. We have the tariffs in place. I wouldn’t suggest getting rid of them all right away. We should get some quid pro quo. I would push him to do something on the currency, raise the value of China’s currency relative to the dollar. That will improve our trade balance. But, hopefully, that’s something that can be worked out fairly quickly. But we have more long-term and bigger issues that we have to deal with, with China.

On intellectual property rights and cooperation

Brancaccio: Yeah, lots of things like, I suppose, intellectual property. And that’s something the Trump administration also noticed.

Baker: Yeah. And here’s where I think our policy has been really wrongheaded, because we’ve had a policy not just with China, but with the whole world and in fact, domestically, making patents and copyrights longer and stronger. And this means more money to the people who benefit from copyrights and patents. And, I mean, there aren’t too many people that are working as table servers in restaurants or custodians who are benefiting from patents and copyrights. So when you make these longer and stronger, you’re redistributing money from ordinary workers to what tend to be highly skilled workers, people in [science, technology, engineering and math], other fields that benefit from patent and copyright monopolies.

And we’ve applied that internationally. The TRIPS provisions in the World Trade Organization does apply that throughout the world. And we made that a major point of pressure with China. And to my view, this is really, really wrongheaded. Because what’s different about patents, copyrights, intellectual property than, say, things like my car, is if you’re driving my car, I can’t also be driving it. If you’re using my idea, if you’re using, let’s say, a vaccine, you could be using it and I could be using it at the same time. It’s not exclusive. And what I would love to see is the U.S. and China trying to work cooperatively and collaborating in as many areas as possible. We’ll have things to fight over with China. But we should be sharing technology, particularly in health care. We saw this — think of how much more quickly we might have had an effective vaccine if everything was done collaboratively, and climate change, if China could reduce their emissions because we share technology with them, or vice versa. That benefits us all. So these are major, major areas where we could benefit by cooperating, rather than by having fights over “This is my patent, this is my intellectual property,” or China saying it about theirs. We should be sharing it, not fighting over it.

Brancaccio: Well, if there’s more sharing, a kind of more open-source vibe, U.S. and China, I mean, how do we be sure that the people who invested in the innovation that led to the patent are getting compensated for that?

Baker: What’s really interesting is we had a great model here. Moderna, which, as we know, is one of the front-runners, the apparently second one to have an effective vaccine in the United States, their research was funded pretty much entirely by the U.S. government. We gave them about $450 million to fund the basic research and the phase-one, phase-two tests, and then another roughly $450 million to fund phase three. We could pay for research upfront and in this case, it looks like it had a very big payback.

So, at least in some areas — I’m not going to say government should fund all research and we should get rid of all patents and copyrights — but at least in health care, we already have a huge, huge foot in the door. We put out $40 billion a year in funding for the National Institutes of Health. And there’s several billion for other agencies as well. But if we just said, “OK, we’re gonna pay for the research upfront, we expect China to pay for research upfront,” and it’s all going to be open, it’s all going to be shared. So people will get paid, but everything will be open, everything will be shared.

On the “interwoven” nature of the U.S. and Chinese economies

Brancaccio: And what about this notion that the finances of the two countries, the U.S. and China, are really quite interwoven, and that if we continued an especially hard line against China, we’re going to bump up against that?

Those of us who are older, we lived through the Cold War with the Soviet Union. And you could say we won. I mean, the Soviet Union doesn’t exist. The Soviet Union at its peak, its economy was maybe half the size of the U.S. economy. China’s economy is already about 20% larger than ours. And it could easily be double the size of the U.S. economy by the end of this decade. So the idea we’re going to spend them into the ground, we’re going to tell them how it is — it’s not going to be like that. So what we have to think is, OK, we have different systems. But we should figure out where we could collaborate, where we could work together and trying to minimize the places where we have conflicts. The real conflicts are going to be there. But let’s not make up arbitrary ones.

Brancaccio: Now, that might cheer up Wall Street and publicly traded multinationals that would like friction eased with China. But it might annoy, I think it would annoy, many working people in the U.S. and be rotten politics for the Biden administration.

Baker: Well, I mean, one of the things that’s for better or worse — you know, you began earlier that I was a critic of U.S. trade with China —

So when we get jobs back in manufacturing, they tend not to be especially good jobs, which again, for the people who get them, that’s great, but it’s not the case that the jobs we might get back in manufacturing are going to be paying $30 an hour, have health care, a pension. Those are gone. That’s not a good story. I mean, I’m not happy about that. I’m just saying we have to look at the world as it is.

So my priority would be trying to avoid conflicts on intellectual property. And, frankly, that actually would be the best thing in terms of trade and manufactured goods because, again, if we’re not charging China all this money for Microsoft and Pfizer and other big multinationals for patents and copyrights and royalties, then they have more money to spend on our manufactured goods. So that actually is a good thing for our manufacturing sectors. But the idea that somehow we’re going to get back to where we were 20, 30, 40 years ago in terms of manufacturing employment, the quality of manufacturing jobs, that’s not in the cards in any story.

Brancaccio: But you’re arguing that less confrontation with China moving forward would be better in the aggregate for American workers?

Baker: Absolutely. Again, I mentioned earlier about income distribution. The more money that Microsoft and Pfizer and these other companies that have all this intellectual property, patents and copyrights, the more money they have, the less money — it’s less for everyone else. So I’m very concerned about income distribution in the United States. And I’d rather see less money to go to the top — the people who benefit from the intellectual property — than those going [to] ordinary workers. So, absolutely, I think a policy with China where we collaborate as much as possible on intellectual projects would mean better outcomes for people who work in restaurants, people who work in steel mills, on down the list. Better outcomes for ordinary workers.