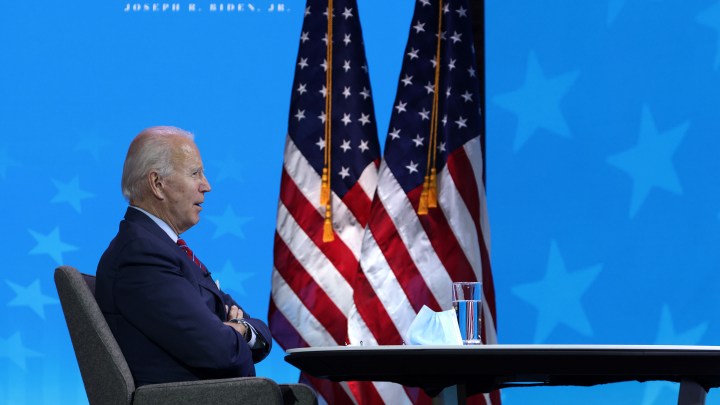 COPY
Biden has called for flexible grants to businesses that have lost substantial revenue. He also wants to refocus the Paycheck Protection Program on businesses with fewer than 50 employees, instead of the current 500. Alex Wong/Getty Images
COVID-19

Biden has called for flexible grants to businesses that have lost substantial revenue. He also wants to refocus the Paycheck Protection Program on businesses with fewer than 50 employees, instead of the current 500. Alex Wong/Getty Images
Listen Now

It’s been months since Daniel Jacobs ran out of Paycheck Protection Program money for his Milwaukee restaurant, DanDan. Now, he’s tapping into an economic disaster loan from the Small Business Administration.

Jabobs said it’s helpful, but it’s not the type of aid he’s hoping for.

“Giving us another loan is not the answer, man,” Jacobs said. “We need grantable money.”

Jacobs said a grant would be more flexible than his PPP loan was. He had to spend that on payroll, rent and utilities in order for the loan to be forgiven. But Jacobs said his restaurant has plenty of other costs.

“Thirty percent of my income is spent on food,” Jacobs said. “If it’s not our biggest expense, it’s our second biggest expense monthly, outside of labor.”

The economic team that President-elect Joe Biden announced last week will have to figure out how to help the millions of small businesses that are struggling to survive the pandemic economy.

Biden has called for flexible grants to businesses that have lost substantial revenue. He also wants to refocus the Paycheck Protection Program on businesses with fewer than 50 employees, instead of the current 500.

De Rugy said making funds available to businesses with as many as 500 employees took the focus away from the ones that needed the money most.

Amanda Ballantyne is executive director of the Main Street Alliance, a small business advocacy group. She said the smallest businesses — say, those with fewer than 10 employees — often have a hard time raising money.

“They’re generally considered high risk in private lending, so there’s a lot that can be done to create programs that are really looking at micro-entrepreneurship,” Ballantyne said.

Whether or not the Biden Administration will be able to accomplish any of these goals will depend on which party controls Congress. And we won’t know which one controls the Senate until January.

But Ballantyne said Biden could work on some goals through regulation and by working with the Federal Reserve.