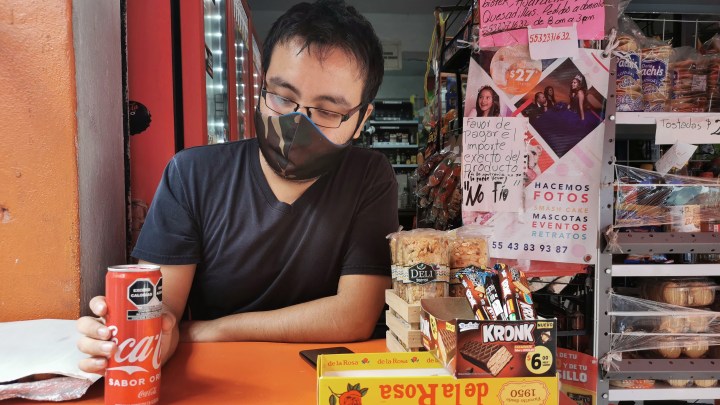 COPY
Esteban Pérez works in the family business: a store in Mexico City that his grandfather started decades ago. He shows a soda can with the new warning labeling in Mexico. Rodrigo Cervantes

Esteban Pérez works in the family business: a store in Mexico City that his grandfather started decades ago. He shows a soda can with the new warning labeling in Mexico. Rodrigo Cervantes
Listen Now

As in the U.S., Mexico faces a severe obesity problem. The government is trying to combat those health issues with a new labeling system for processed food.

But some businesses say these warnings will hurt them. Esteban Pérez’s family runs a tiny store located in front of an elementary school in Mexico City. It sells chips and other processed foods.

Pérez says their income depends mainly on the kids from the school. During the pandemic, he said their sales dropped down to 30% of what they used to be. And he said new health rules on product labeling will affect them even more.

The new law requires processed food and drink packages to carry warning labels in front with messages such as: “high in sodium,” “excessive sugars” and “not for children.”

Aída Fayad is a nutritionist who directs a clinic in Mexico City. She said nutritional habits can be modified, but through education. She said prohibitions don’t work and the new labels may be confusing.

But Dr. Hugo López-Gatell, the undersecretary of health in Mexico who pushed for the new labels, said so-called “junk food” can lead to health conditions that make people more vulnerable to COVID-19. López-Gatell, who leads the fight against COVID-19, said Mexico has an oversupply of processed products, and said the labeling will reduce demand.

“I really don’t think that this is the way to fight obesity, overweight and diabetes,” he said.

Zabludovsky said food production is one of Mexico’s largest manufacturing sectors, with about 80,000 companies producing these kinds of goods.