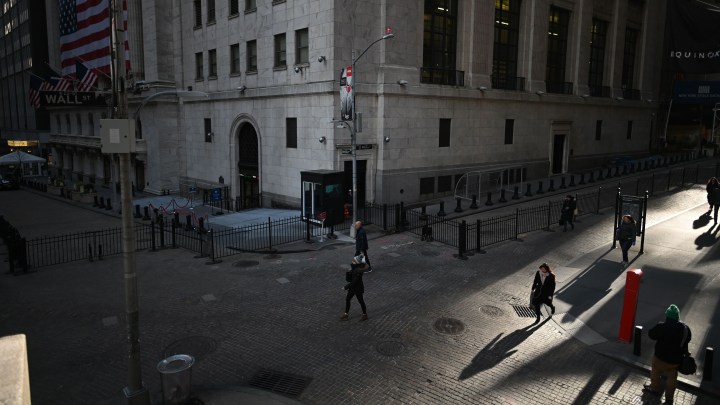 The Federal Deposit Insurance Corporation came out with a report this week looking at the state of banks in this economy. The report found that bank lending volume fell in the most recent quarter, driven by decreases in commercial and industrial lending.

That might seem counterintuitive, given that interest rates are at rock-bottom levels. Companies normally use bank loans to grow their businesses, build a new factory or acquire another company.

But that kind of activity has not fully recovered, according to Drew Pascarella at Cornell University, and “mergers and acquisition volume in the U.S. is down 30% year-over-year.”

Pascarella added that companies also use bank loans to raise cash for a rainy day, which happened a lot at the outset of the pandemic. “The companies that had existing relationships with banks, they ran to the banks and tried to borrow as much money as they could,” he said.

In the time since, that kind of panic borrowing from banks has calmed down, said Karen Petrou, managing partner at Federal Financial Analytics. “Companies felt more secure that the world wasn’t coming to an immediate end,” she said.

But Petrou said that because the economy is still shaky the idea of taking on more bank loans did not seem prudent for many companies, even with interest rates near record lows.

“No matter what the interest rate is, if you’re a corporate borrower, you need to pay it back,” she said.

One more factor is that when bigger companies have needed cash, they often have been able to raise it from investors by issuing bonds. Those have longer payoff periods than bank loans.

Bonds also come with fewer conditions, said Matteo Arena, a professor of finance at Marquette University. “So as bonds are more attractive, then there’s less need for going to a bank for a new loan,” he said.

But smaller companies don’t have the option of issuing bonds. Arena said those companies are borrowing less from banks because many of them are going out of business.