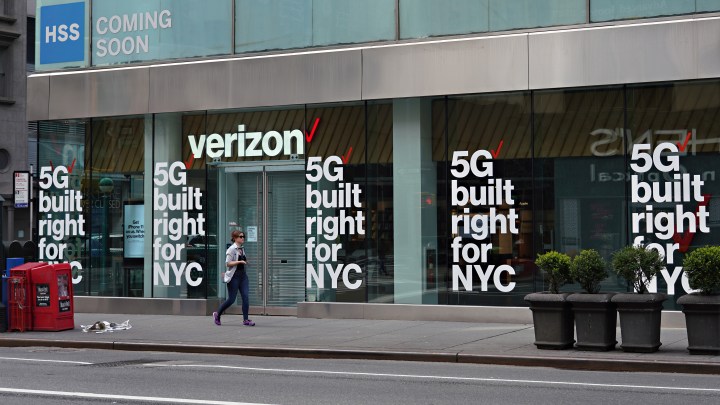 5G, perhaps you’ve heard of it. It’s the superfast wireless signal that’s up to a hundred times faster than what we have now.

It’s going to bring us self-driving cars. And allow doctors to perform surgery from the other side of the continent. It’s the future.

Thing is, it’s been the future. For years now. When will it be the present?

It has been rolling out slowly here and there. D.C. resident Matthew Farris sometimes catches a signal on his new 5G-enabled iPhone 12 Pro. When the 5G signal shows up on his phone, “it seems to be consistent with what I had before,” he said.

Even more rarely, he’ll get a signal for UW, or Ultra Wideband 5G – that’s Verizon’s brand name for the really, really fast kind of 5G. “I’ll open up my speed test and do a test, and by the time the app loads, the UW signal goes away and it’s back to normal. I did have some success last Saturday. I was on a roof of a building in downtown D.C. and got the signal and tested it out, and it was blazingly fast,” Farris said.

Blazingly fast as in 60 times faster than normal. He could see it on his speed test, but he couldn’t really tell from his apps.

“It’s one of those things where it’s fun to know that you have it, I guess,” he said.

Not quite the revolution we were promised.

“A lot of people feel like kids in the back of the car asking, ‘Are we there yet?’ and the answer is no we’re not there yet,” said Roger Entner, founder of Recon Analytics, a telecom and media research and analysis firm.

The reality right now is this: Superfast 5G exists, but it’s rare. The signal for that type of 5G (known as millimeter wave) doesn’t go far because it’s easily obstructed by walls or trees, so it’s only close to special antennas. You might find them by a stadium, but not two blocks away.

Lower-speed 5G is more common, but definitely not available everywhere — it depends on the wireless company. Oftentimes, the lower-speed 5G is comparable to existing 4G.

More coverage will come and it’ll get faster over the next few years. Different telecom companies have different types of 5G, and none of them cover the whole country.

Why, though, has it taken this long? What has the holdup been?

The issue is partly that our expectations have been set unreasonably by marketing efforts on the part of telecom companies and general hype. So what feels slow is actually reasonable and even fast, said Entner. But there have been some roadblocks.

“One of the issues is the spectrum,” he said. Spectrum, as in the airwaves on which 5G travels.

“The bands that are the most suitable for it were already occupied here in the U.S.,” according to Entner.

The military and satellite companies, among others, controlled the ideal airwave real estate, and it has taken decades of negotiation, sharing agreements and new technology to pry it out of their hands. Another issue: There’s a lot of physical construction involved in building a 5G network, said Dan Hays, a principal with PWC’s strategy consulting practice.

“A typical mobile network operator in the United States may have anywhere from 50,000 to 100,000 cell sites today, and virtually everyone of those will have to be upgraded to 5G,” he explained.

“Verizon and AT&T are both on record stating that their investment in building out their 5G mobile networks will be in excess of 20 billion U.S. dollars,” said Will Townsend, head of networking practice for Moor Insights & Strategy. “Those operators have to recoup that investment,” he said.

“We know investors are at this point not convinced,” said Alex Holt, global head of tech, media and telecoms at KPMG. Maybe telecoms will start make their money back by charging more on people’s cellphone bills?

“Trying to extract more dollars for 5G has yet to be proven,” he said.

In fact, surveys conducted by PWC show only a minority of consumers would do that right now. “We found that two-thirds of consumers were not interested in paying anything more for 5G versus what they pay for 4G,” said PWC’s Hays.

Another option: charge businesses for commercial applications. “It’s a slightly new path, but we do believe in it,” according to Holt.

All told, the payback for 5G is up in the air.

“You know kind of the same way when 4G was launched a decade ago, I don’t think anybody was saying, ‘Oh great, this will let us create Uber,’” said Bill Menezes, director analyst with Gartner. “Those are things developers made happen once they got a sense of what the 4G network was capable of and then took it from there.”

The problem is 5G’s been hyped to death for years. So until we get doctors performing retina surgery in LA over 5G from New York, and swarms of semi-sentient self-driving cars picking up the kids from school, we’re just gonna have to be a little disappointed — or a little bit patient.