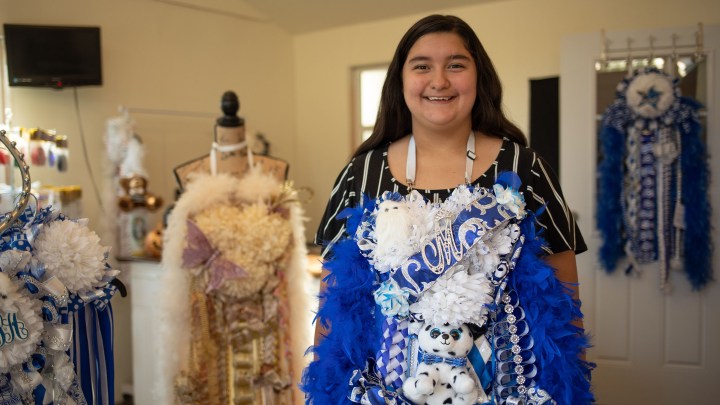 COPY
Maya Gonzalez, 13, the daughter of Shannon Gonzalez, sports her fifth specialized mum. It is decked out with her favorite color and stuffed animal, and her initials, lights and feathers. Keren Carrión/KERA
COVID-19

Maya Gonzalez, 13, the daughter of Shannon Gonzalez, sports her fifth specialized mum. It is decked out with her favorite color and stuffed animal, and her initials, lights and feathers. Keren Carrión/KERA
Listen Now

For those who have never seen a Texas homecoming mum, Dallas photographer Nancy Newberry explains.

“I describe them as a corsage that’s exploded,” she said. “Imagine a big artificial chrysanthemum, made with ribbons, braids, beads — sometimes even stuffed animals or photographs.

And preferences changed. Gina Waters, head of the Texas State Florists’ Association, originally got her start in the flower business making homecoming mums with fresh chrysanthemums. But, nowadays, she said florists rarely get orders for those.

“Ten years ago, everything switched to the artificial mums,” Waters said.

Many mums are now created by specialty mum makers, who sell their wares on their own websites or on sites like Etsy. In typical Texas fashion, the artificial mums kept getting bigger.

“We’ve gotten into some pretty huge mums,” said Shannon Hart Gonzalez, who runs Mums and Kisses, a custom homecoming mum maker outside of Fort Worth. Her modest mums cost $30. Complex creations could cost up to $500.

“Currently, I have an order for what we’re calling the ‘mum dress,'” Gonzalez said.

“This is something that completely engulfs the girl on the front, and the back is a sash that goes from her shoulder all the way to her hip,” Gonzalez said.

Gonzalez started making mums for friends about 15 years ago. Then, in 2016, her son needed a mum for his homecoming date. When she saw the prices she thought, “I can do better than that.”

“And I just started an online store, and they took off from there,” she said.

She also needed the income, and it was something she — and mum makers like her — could do from home. In normal years, Gonzalez said Mums and Kisses can sell as many as 400. She said her earnings covered most of her son’s first year of college tuition at a private school.

And then 2020 came along. “When COVID hit, it was a shocker,” Gonzalez said. “We were hoping that things were going to be over quickly, and that it wouldn’t affect our mums season at all. But, unfortunately, that’s not how it went.”

Earlier in this season, Gonzalez said her sales were down 42% from last year. Now, as schools across Texas slowly reopen and schedule their homecomings, she said she’s only down 13%. The latest homecoming on her calendar is in December. So she aims to close that final sales gap before the end of the year.