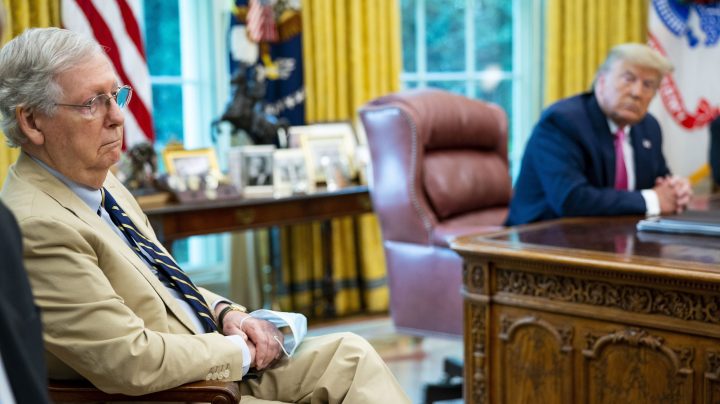 Congress is still at odds about another coronavirus relief package.

House Speaker Nancy Pelosi and Senate Minority Leader Chuck Schumer are calling for a large bill, similar to the one passed in March to boost the U.S. economy.

Meanwhile, Senate Majority Leader Mitch McConnell continues to reject Democrats’ call for a large funding package and says the economy is improving. His position is that if it happens at all, the bill will resemble the GOP’s $500 billion proposal — a “skinny” package, if you will.

But with unemployment still high and the virus on the rise, will that skinny bill help the people who need it most?

“Marketplace” host Kai Ryssdal spoke with Gbenga Ajilore, a senior economist at the Center for American Progress. The following is an edited transcript of their conversation.

Kai Ryssdal: As you just heard, Sen. McConnell said once again today, he does not see the need for a large relief package for this economy. What do you think?

Gbenga Ajilore: It is very surprising to hear that, given where we are in terms of the pandemic, but also given what happened earlier this year. If you think about what happened in March and April and the CARES Act, and how that helped out the economy, we should want more of that, given the numbers.

Ryssdal: You have said, repeatedly, you said it on Twitter the other day and you’ve said it in a piece online, our economic policies are basically geared toward white men. If white men are doing fine, then we get the economic policy that white men need.

Ajilore: That is correct, because if you look at the numbers, you look at what happened in April, when we had the peak of unemployment, general unemployment was at 14.7%, white men had an unemployment rate of 12.4%. That’s when we saw the CARES Act. That’s when we saw all the other things and [the Paycheck Protection Program] and a lot of spending to help out this economy. Since then, the unemployment rate for white men has dropped down now to 5.8%. And so, you can look at these policymakers say, oh, well, things are looking good. But if you look at it for other groups, so for example, black men are at 11.5%. So black men have a similar unemployment rate that white men had in April. And then you also even look at what’s happening with women. Women last month, 865,000 dropped out of the labor force, but they’re not even counted in unemployment and they only got half that back. So, looking at those numbers, it’s a big struggle, a struggle for the economy as a whole. But if you look only at white men with a 5.8% unemployment rate, then you could say, oh, we only need a skinny bill. But white men are not the economy. Everybody’s the economy, and we have to focus on that.

Ryssdal: Let me ask you one more thing and I guess it makes sense, given the state of play right now. But you wrote the other day, as this pandemic has hit home, “lawmakers cannot be counted on to respond to the magnitude of this crisis (or any future economic crisis).” That is fairly bleak, that we can’t count on Washington to fix this economy when it’s so desperately needed.

Ajilore: That’s the truth. We lost a lot of jobs, unemployment peaked at almost 15%. And we put in $3, 4 trillion into the economy. And the thing is, it worked. And instead of putting more money back in, continuing these things, like direct checks or expanded [unemployment insurance], which helped people, set 8 million people out of poverty, policymakers sat on their hands and let it expire. And all the way through the election, it didn’t happen, shocking pretty much everybody. So of course, you know, we can’t expect policymakers to do that, because in a position where they would have done it, where they should have done it — we didn’t see it, so we can’t trust them anymore.

Ryssdal: Well, how worried are you then about what is likely to happen in January? Assuming Republicans hold the Senate, right, and I get that I’m making some assumptions there. But President [Joe] Biden will come in with a larger stimulus bill, it will pass the House. And then it will again be subject to Republicans in the Senate who will say, no, we don’t need it, and more importantly, we have to start thinking about austerity because we’re spending too much money. Then what happens in this recovery?

Ajilore: What I think is going to happen is that we are going to end up with something close to a skinny bill. And then policymakers are going to wipe their hands and say, OK, well, we’re done. And we are not going to have the kind of recovery that’s necessary to actually help this economy grow. And we’re going to struggle again, and we’re going to struggle throughout. And we saw this in the Great Recession, you know. We had a lot of money put in, and in 2011 we pulled back. One of the things that happened in 2011 is that white men’s unemployment rate was lower than everybody else’s. And so, we pulled back. We even lost, I think it was, half a percentage point of GDP growth throughout that period. We have a long, slow recovery that’s going to harm — not just, you know, communities of color — but even think about rural communities. They’re going to be struggling too, and they’ve been struggling. And that’s the big problem.