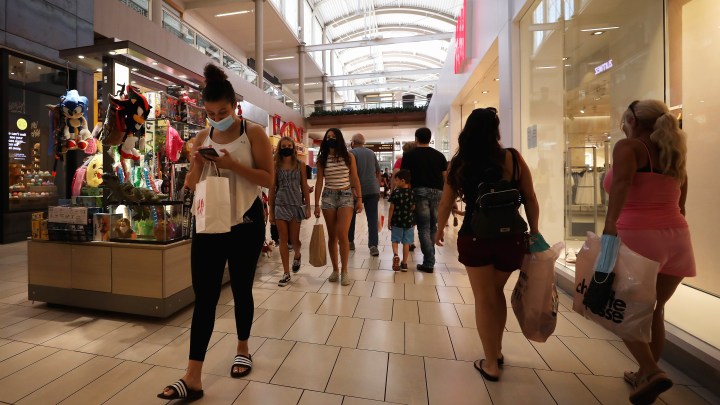 After four straight months of increases, consumer prices held steady in the month of October, according to figures out Thursday from the Labor Department.

Sounds like good news for a pandemic-ravaged economy, right? But steady prices — even falling prices, in some cases — tell the story of an economic recovery that’s losing steam. It’s all a matter of supply and demand.

We’ve seen this supply and demand push and pull on prices right through the pandemic. Remember back in the summer when COVID-19 shut down food-processing plants and there were meat shortages? Supply fell and meat prices went up.

Now consumer demand in the economy is weakening and holding prices down.

With COVID surging, consumers don’t want to go out and spend money. And they may not be able to, said economist Dan North at credit insurer Euler Hermes North America.

“Restrictions — they’re already coming in some states,” he said. “It’s going to shut down significant parts of the economy like it did before, and it’ll make consumption very difficult.”

“A lot of people are still very worried about overspending,” Stovall said. “If they do have a job, they’re worried about being furloughed with the additional spike in COVID.”

“We’re running into the end of the year; we’ve got an income cliff coming up for a bunch of people,” said Brad McMillan, chief investment officer at Commonwealth Financial Network. The “income cliff” he’s referring to is the expiration of federal pandemic unemployment benefits at the end of the year. That adds up to billions a week in payments to more than 13 million Americans.

And that’s not all that’s set to run out.

“It’s not just the income. It’s the prohibition of evictions [and] foreclosures,” McMillan said. “In other words, there’s a lot of financial damage that isn’t showing up on the radar right now, but will start to show up very shortly.”

Unless, McMillan said, Congress extends those payments and protections before they expire in December.