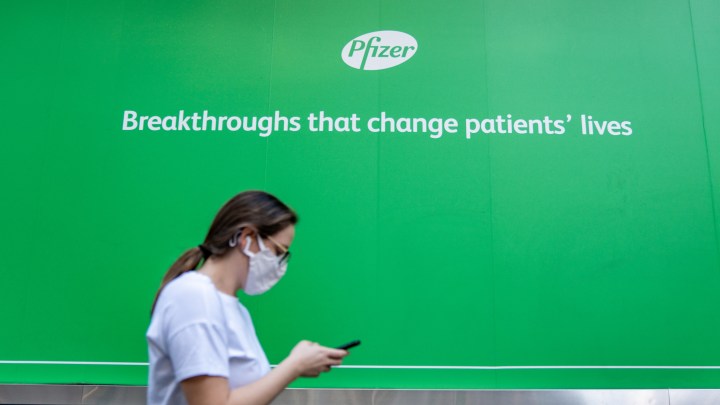 The drug company Pfizer and its German partner BioNTech announced initial late-stage vaccine data Monday. It revealed that the vaccine under development is more than 90% effective in preventing COVID-19, though the trial is still ongoing and results are not yet complete.

The companies were shooting for a 60% threshold, and other experts said even a 55% effectiveness rate would have made the vaccine viable.

In the last few months, Pfizer and BioNTech have shared other details of the process including trial blueprints, the breakdown of the subjects and ethnicities, and whether they’re taking money from the government.

Why transparency? Surveys suggest a high degree of public skepticism about this vaccine process. In fact, 51% of Americans said they would “definitely” or “probably” take a vaccine, according to a September poll from the Pew Research Center. That’s down from May when 72% of respondents said they would likely get one.

Dr. Eric Topol, head of innovative medicine at Scripps Research, said, “I put a lot of pressure, as did others, to get those protocols transparent and released.”

Topol applauded Pfizer for waiting until it had enough data before going public on Sunday.

“So the fact that this was done right and it didn’t interfere with the election, it’s much more auspicious and important,” Topol said. “It wasn’t used as a prop or a tool. It stands on its own. That’s essential.”

Pfizer also says it worked to diversify study participants: 42% are from “racially and ethnically diverse backgrounds.”

That was important, said drug discovery chemist Derek Lowe, because many in the African American community have harbored suspicions about vaccines, ever since the government’s Tuskegee syphilis experiments decades ago.

Those were conducted on Black men who were neither informed of the study nor treated with effective drugs, “which was a medical disaster,” Lowe said. “An ethical and moral disaster. And it has messed up the relationship between that community and drug research ever since,” he added.

As for funding, many vaccine firms took R&D money from the government, though Pfizer did not. Pfizer CEO Albert Bourla told CBS’ “Face the Nation” in September that the company did so to “liberate our scientists from any bureaucracy.” “When you get money from someone, that always comes with strings,” he said.

The next big test, said Jennifer Miller at the Yale School of Medicine, comes when drug companies release their data, “so that other scientists who the public trust can go in, replicate findings, and communicate them to the public. And hopefully build appropriate trust in a vaccine.”

Enough trust to take the vaccine and slow the pandemic.