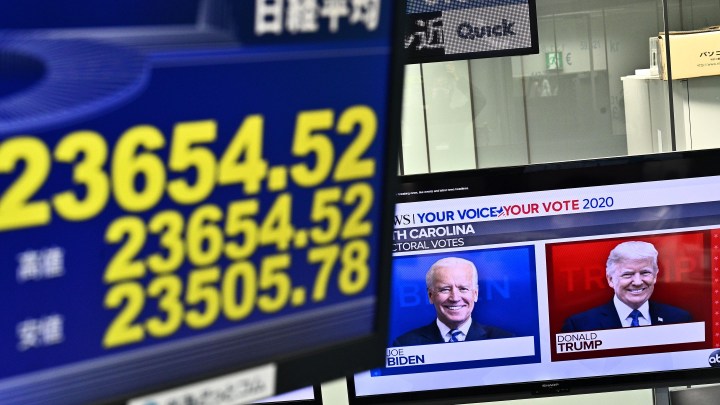 There is no verdict in the presidential race — but is there enough information now for companies and market participants to start repositioning themselves?

Among other things, we know President Donald Trump intends to go to court to somehow limit which ballots are counted. Trump also falsely claimed he had already won the election. And, already, economic policy is being reshaped, said Ian Bremmer, who advises corporate clients on political risk as president of the consultancy Eurasia Group.

To start, given the current results, Bremmer said it’s unlikely Democrats are able to make significant gains in the Senate.

Listen to all of Bremmer’s conversation with “Marketplace Morning Report” host David Brancaccio.

A divided government or even divided Congress would be familiar for the nation, but David Kelly, chief global strategist at JP Morgan Funds, said it would have profound implications for domestic policy — namely, how to move beyond impasses over more support for the economy during the COVID-19 pandemic. These kinds of standstills are typical for a divided government.

“In 2008, of course, Barack Obama won and there was a fair amount of fiscal stimulus then,” Kelly said. “But once he lost the House, in the 2010 elections, then a lot of fiscal stimulus really petered out, because the Republicans wanted to put a halt to a lot of spending plans or deficits. And you could see that sort of situation again.”

Of course, this is all still subject to change depending on how election results continue to roll in.

Listen to all of Kelly’s conversation with Brancaccio.

Who will control the Senate?

Also zeroing in on how the Senate shakes out is Karen Petrou, managing partner of the Washington-based economic consulting firm Federal Financial Analytics.

“I think we do know that the Senate control, whoever ultimately holds it, will be narrow,” Petrou said. “And that will give the president, whoever he is, greater or lesser opportunity to do what he will choose to do. It is not going to be an overwhelming ‘triple-blue scenario’ in which a Biden administration would have unlimited power to do a progressive economic agenda.”

Listen to all of Petrou’s conversation with Brancaccio.

Petrou said it’s hard to read too much into all of the market movement Wednesday, though.

“If I were reading anything into all of the short-term movements of the markets, I’d lose my mind, because none of that makes any sense,” she said. “Markets, when they’re behaving properly, which I wish they would, need certainty about profits, certainty about tax policy, certainties about growth, and we have none of that. I’m afraid we won’t get it for some time yet to come.”

As far as the bets on the U.S. stock exchanges that investors are making, one thing that stands out is the sharp upward trend of the Nasdaq composite, which is an index full of technology companies. Nasdaq futures were up more than 3.5% Wednesday morning.

What might that be about? Bremmer said it has to do with the waning prospect of a blue wave. If Democrats controlled Congress and the White House, for instance, they could push through higher taxes and more regulatory policy for Big Tech players, even going so far as to entertain breaking up companies like Google over antitrust concerns.

“I think the Nasdaq, specifically, is reacting to the fact that we definitely know that strong outlier responses to tech companies are virtually inconceivable in a much closer political environment,” Bremmer said.

“Because, again, the president announcing that he has won has no force of law whatsoever,” Bremmer said. “But, Republican senators who decide that they are going to sit on their hands or publicly support what the president is doing, as opposed to opposing him, that would matter. People coming out on the streets, that would matter. How the mainstream media, how social media is responding to all of this, that would matter. So this is not about how many votes have been counted, but it is about what’s happening politically in the country. And those things can have consequences.”

How international financial markets have responded

In the run up to Election Day, global investors increased their bets that Democrats in the U.S. would sweep the White House and both chambers of Congress.

But the early hours of Wednesday morning proved declaring a winner would not be so clear-cut.

Now, as the race continues to tighten in key battleground states, stock markets around the world are counting on more uncertainty, according to Mohamed El-Erian, Allianz chief economic adviser.

Listen to all of El-Erian’s conversation with the BBC’s Victoria Craig on the global edition of the “Marketplace Morning Report.”

“What [markets] are telling you right now is because the country remains deeply divided, we shouldn’t expect any major economic policies … and we should not expect a decisive response to the economic challenges,” El-Erian said.

He stressed it’s still early in the day and ballots are still being counted, but in the meantime, markets — which are always forward-looking — are starting to shift focus to the Federal Reserve’s two-day policy meeting for some reassurance.

“The markets now expect the Federal Reserve to do another round of so-called ‘insurance stimulus,’ meaning that they are insuring against future uncertainty and economic damage,” El-Erian said.

For international investors, America’s standing on the world stage is a primary focus, and until victory has been officially declared, El-Erian said, uncertainty in global markets will remain.