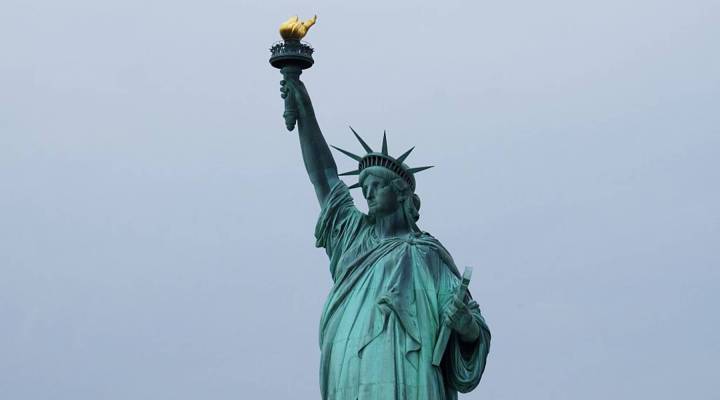 An independent America. The White House vs. Silicon Valley. No reform.

Every year, the Eurasia Group — a global business risk consultancy — publishes its fresh ranking of things on the global stage that should keep us up at night over the next 12 months. The consultancy’s Ian Bremmer joined us to talk about these risks, along with some topics that we shouldn’t be quite as concerned about.

You can read the full transcript of our interview below.

David Brancaccio: So on this list of risks, numero uno here is listed as “independent America.” This is in part the Trump agenda.

Ian Bremmer: It is. It’s been coming for a long time, but it’s quite definitive with the inauguration of President Trump. The idea that the United States is not isolationist, but is completely unilateral-ist, right. We’re declaring independence from our burdens and our responsibilities with allies and multilateral structures all over the world. And while that doesn’t cause a lot of risk at home in the United States, it does for just about everyone else.

Brancaccio: And what’s so interesting about that is that is a fundamental reversal of everything we’ve seen since the Second World War.

Bremmer: It’s a fundamental reversal of the Pax Americana. But the rise of China has been coming for a while.  The willingness of the Russians to undermine American interests in their corner of the world has been coming for a while. The weakness of Europe and the trans-Atlantic relationship, that too. And American allies were concerned, you know, with the wars in Iraq and Afghanistan with Obama’s various red lines the Americans didn’t follow up on, that they didn’t have the ability to count on the United States the way they had historically. With Trump, they know they can’t. And that is really gonna drive much more risk in the Middle East, a much weaker trans-Atlantic relationship with Europeans going their own way. And a lot of opportunities for the Chinese to develop alternatives to the U.S. — both regionally as well as on a global economic agenda.

Brancaccio: Now this doesn’t just cause agita in foreign capitals. I mean, multinational companies that work across these borders are also trying to figure out how this is gonna play.

Bremmer: Well, multinational corporations like a world where globalization and Americanization are the same thing. And while globalization is continuing, the idea that the United States is gonna drive a single set of global standards or a global internet, you know, or an increasingly global trade universe, like that’s clearly off the agenda. So this is a much more complicated, much more challenging environment for U.S.-based multinationals.

Brancaccio: And we should remind ourselves that Donald Trump doesn’t see this as a risk. He sees this as, I guess, an opportunity.

Bremmer: Donald Trump believes that American corporations should be patriotic. So they shouldn’t be rapacious, just seeking profit no matter what, and not paying attention to the American worker. Instead, they should be American corporations, so that means if they’re not prepared to actually bring jobs back here, then they’re gonna get hit on tax, on tariff, you name it. Now, there’s no question there’s a lot that Trump can do that will support U.S.-based multinationals in terms of taxation and regulatory policy. But from a global perspective, U.S. multinationals — you could make the argument they shouldn’t even be called U.S.-based. They’re just multinational corporations, corporate inversions where companies just leave the U.S. for better taxes. Why would they be U.S.-based multinationals? Trump has a point there. But again, if you’re talking about what’s driving global, political risk, this clearly is top of your agenda.

Brancaccio: A big risk that you list is tensions between Silicon Valley, the tech community, and the incoming administration.

Bremmer: Well, that’s because that is the group that is both most powerful, in terms of driving the U.S. in the global economy, and also most ideologically and substantively in opposition to what Trump wants, right. I mean, they’re the ones that own the new social media that, in some ways, facilitated a Trump victory. But now they see that as a problem and they’re going after the algorithms and going after the fake news. Trump’s gonna want to set up his own. They also have a more libertarian mindset, right. It’s: let’s keep the data our own, and we want control of it, but we certainly don’t want to focus on, you know, sort of getting rid of individual liberties where Trump is gonna focus on national security. So I think the ability of Silicon Valley and Trump to come to a modus vivendi, which you would see with a lot of other corporations, a lot harder here.

Brancaccio: Now when you say Trump would set up his own, you mean new, regulatory framework or alternate social media?

Bremmer: Well I think, in that case, I was talking about alternate social media, right. I mean, I think that the people that Trump likes are gonna be treated very differently in the media space, where a Jeff Bezos, who owns the Washington Post, but also owns Amazon — I suspect both of those are gonna be seen more oppositional to the Trump administration. Trump will use the bully pulpit to make that clear.

Brancaccio: It’s hard at this stage. I mean, the administration hasn’t even turned over the motor yet to figure out where the money flows. Some of it has been into stocks since the election, but how do you bet on this?

Bremmer: One thing that’s gonna be challenging this year, is that outside the U.S., you don’t see much of a reform agenda anywhere, right. In some countries, they already feel like they’ve done enough, like Mexico and India, so there’s not a push in 2017 for more. Some countries really desperately need more reform, like Saudi Arabia, but they can’t make it happen. And other places, they’re just waiting for the next political cycle in Brazil, in France, in Germany. It’s not gonna be obvious that there’s a set of markets that are, you know, doing really well. Again, redounding to a strong dollar, redounding to a stronger U.S. set of equities, because the U.S. clearly looks like the cleanest dirty shirt in this environment.

Brancaccio: I always like each year, you also highlight things that we don’t have to worry quite as much about — sort of red herrings that divert our attention. One thing is U.S. domestic policy. Which way is that going? You say that’s actually more predictable than we think.

Bremmer: Not only more predictable, but to the extent that there is a surprise that’s likely to be upside. I mean, this is a Republican House, a Republican Senate and Trump. And he stacked his cabinet with a lot of people that are pretty business-friendly, I’m not sure that the workers are gonna feel much better in 2017 in the United States. But certainly if you look at tax regulatory environment, infrastructure spending, this feels good for U.S. growth. Those numbers should be positive in 2017.

Brancaccio: In other words, which way is domestic policy going? The answer is take a look at the traditional Republican agenda.