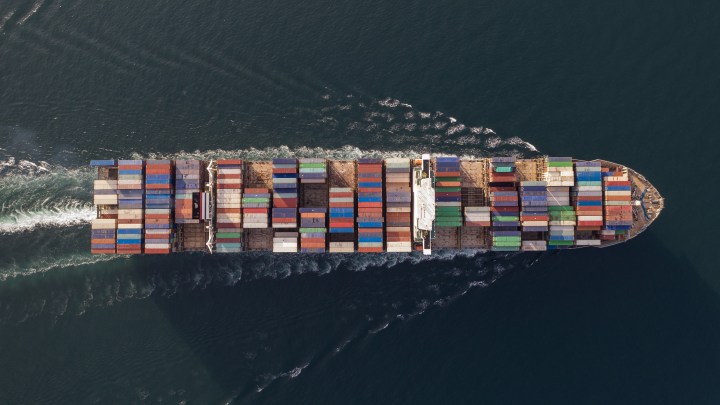 As COVID-19 cases surge across much of the world, pandemic border and transportation controls are affecting some of the most essential, yet invisible, workers in the world. We’re talking about ship workers on vessels that deliver everything from crude oil to holiday gadgets to pandemic medical supplies around the world; 90% of world trade moves by ship.

Ship worker union representatives and others say stranded workers tend to be reluctant to speak up, fearing retaliation and industry blacklisting. But one worker offered to share his experiences with Marketplace.

I connected with ship worker Raymond Seguin more than a month ago on Facebook, where he’d posted about his crew’s situation.

“All we want is to go home,” Seguin wrote, “because we are already exhausted and stress also we are longing to our family.”

Seguin, an engineer from the Philippines, had signed an eight-month contract to work onboard a grain vessel. The contract ended in spring, when the pandemic was raging, upending global travel.

To limit the spread of the virus, many countries closed their ports to crew changes (even as they allowed cargo on and off). Even if workers were allowed off, canceled flights prevented them from flying home, so their companies kept the seafarers onboard. Visa restrictions and bans on workers from certain countries also prevented crew changes.

Seguin and his crew were stuck at sea.

So they extended their contracts, kept working and begged for help from the worldwide union representing shipworkers, the International Transport Workers’ Federation, and anyone else who would listen, including reporters.

“Would help me to contact ITF and tell our grievance regarding our present situation, because all I want is to go home,” Seguin wrote to me. “I already talk to my colleagues and they are also willing to be interviewed.”

Seguin messaged from China after working at sea for 13 months straight. That exceeds the 11-month limit under the International Labour Organization’s 2006 Maritime Labour Convention, ratified by 97 member states. He and his crewmates had initially planned to get off in the summer in South America.

“When we departed Brazil, our company promised us in Singapore we [would] depart,” Seguin said in an interview via Facebook audio. But when the vessel arrived in Singapore, the crew change was called off.

“And when we arrived in China, they canceled it again.”

Canceled due to the COVID-19 risk. Singapore’s port authority recently cited a “resurgence” of cases. So the crew steamed on to Canada, across the choppy waves of the Pacific.

“Big waves, so you cannot sleep, because your things are falling down,” Seguin said, noting that crew members’ baggage was tossed around their sleeping cabin. “When the ship is rolling, your bag is also rolling.”

By then, he said, he was “tired and mentally stressed,” missing his wife and 11-year-old daughter. That’s when Seguin messaged officials at ITF, who intervened on his crew’s behalf from Vancouver.

“We looked up the vessel, we determined the operators,” Peter Lahay, Canadian coordinator for the union, said. “And we sent them a fairly strong email that said things like, ‘There are pathways home from Canada. They have a right to go home.'”

Marketplace emailed the vessel owner, Transmed Shipping in Greece, but didn’t hear back.

“If you’re operating a fleet of 40 ships, and each of them have 20 crew, that’s 800 seafarers flying back and forth around the world,” he said. “It costs a lot of money. What they’re doing is just making excuses, saying ‘Don’t you know, it’s too hard. There’s a pandemic on.’”

More than 400,000 ship workers remain stuck at sea, the ITF estimates.
Christiaan De Beukelaer, a cultural policy researcher and lecturer in Australia, was one of them. De Beukelaer joined a crew on the Atlantic as a trainee this spring to conduct field work on the shipping industry and low-carbon alternatives. But when COVID-19 broke out, his three-week tour grew to five months. It was mentally exhausting for the entire crew.

“Everyone deals with the uncertainty and the stress very differently,” De Beukelaer said. “Some people really retreated into themselves. Others became quite a bit more emotional. Others really needed mutual support.”

De Beukelaer said he tried to defuse tensions in all kinds of ways.

“Once I was pretending to rhyme some verses,” he said, “and one of the fellow crew says ‘Oh, I’m happy you’re not a rapper, because your rapping is really terrible.’ And frankly, it was.”

One of the strangest moments: coming ashore to pandemic lockdown.

“If you’ve been at sea for over a year, then when you left, none of this was around,” he said. “Your country was a completely different place. You’ve probably had extremely limited contact with family and friends, some of them who may have fallen sick, or who may have even died from the virus.”

With COVID-19 cases rising again, governments may get stricter with crew members getting off. And overworked ship workers at the helm increases risks of crashes and spills.

“It’s actually involuntary servitude at some point, where you’re not allowing these individuals to have a break,” Paul Bingham, transportation consultant at IHS Markit, said. “That is a concern for safety on these massive, expensive and potentially environmentally risky vessels.”

Bingham said the problem is seafarers have no real advocates beyond their union, because hardly anyone sees what they do.

“Their invisibility out on the oceans makes it difficult to understand just how important they are.”

“Their invisibility out on the oceans makes it difficult to understand just how important they are as the heroes of keeping commerce happening, moving essential PPE during the crisis,” he said.

Back on Facebook audio, ship worker Raymond Seguin declared himself relieved, about to fly home after more than 400 days at sea. “Now are in [the] airport, taking pictures,” he said.

After arriving home in the Philippines, will he work on a ship again?

“Yeah, because I’m already 10 years working on a ship,” Seguin said. He said seafaring is the only job he can get.