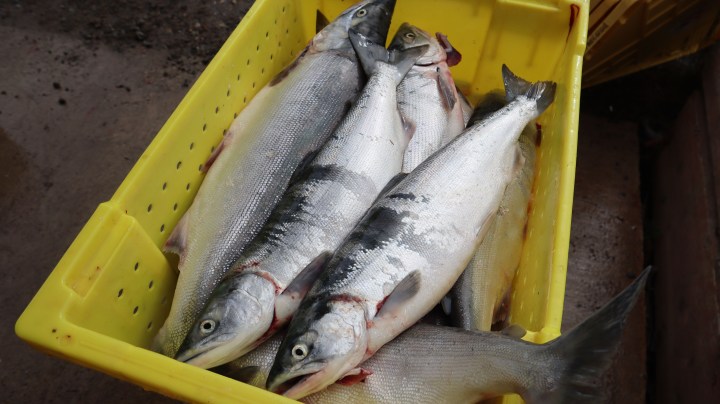 COPY
In 2020, salmon processors didn’t have enough people to cut, package and ship fish, so they bought less. In turn, fewer salmon were harvested. This year, biologists are forecasting a record run. Emily Schwing

In 2020, salmon processors didn’t have enough people to cut, package and ship fish, so they bought less. In turn, fewer salmon were harvested. This year, biologists are forecasting a record run. Emily Schwing
Listen Now

In 2020, the price per pound for Bristol Bay, Alaska, sockeye salmon dropped to some of the lowest prices fishermen have seen in several years. The famed fishery, like most industries, wasn’t insulated from complications brought on by COVID-19.

Each summer, these companies hire thousands of workers from all over the world, but in 2020 they were hamstrung by quarantine and travel restrictions. The processors simply didn’t have enough people to cut, package and ship fish worldwide, so they bought less. In turn, fishers harvested fewer salmon.

This year, optimism among those who are out fishing is bolstered by forecasts. Bristol Bay is home to the world’s largest wild sockeye salmon run. Prices are way up from last year and biologists believe they might see the largest run of Alaskan sockeye on record this summer.

“We are expecting a big run,” said Travis Elison. He’s the Bristol Bay area management biologist for Alaska’s Department of Fish and Game. “We forecasted over 50 million fish for Bristol Bay total. We are seeing indications of a run that could be much larger than that. This one has the potential to be a record total run to Bristol Bay.”

The number of fish caught this year has already surpassed 60 million. It’s all welcome news for fisherman Nathan Hill. He uses a 300-foot setnet that’s fixed to the beach to harvest sockeye out of Naknek. When the tide is in, it floats his net and dozens of salmon swim straight into it.

Fishing for sockeye is hard labor. And there are lots of complications.

Despite a lack of sleep, a few worries about his pickup truck and a bent boat propeller, Hill is more than happy to be doing the work. At this time last year, fishermen weren’t even sure they’d be out on Naknek beach.

“I think it’s one thing with COVID that I noticed,” Hill said. “It seems like everybody showed up early this year. It’s like, ‘Why is everybody here?’”

Hill said every summer is like a homecoming, but even more so this year because COVID-19 put this fishery in serious jeopardy.

“Industry in Naknek is very important, and there was a lot of push to keep the fishery going, and you had processors that had fishermen that wanted to fish, and so it was a big mixture of emotion,” he said.

In a region whose population sometimes triples in size in the summer, much of that emotion comes from long-held memories of the 1918 Spanish flu. Many villages in the Bristol Bay region were hit hard by the disease. In some cases, villages saw most of their adult population wiped out, many of whom were cannery and fish-processing workers.

Months before the fish start to arrive here each July, Wlaysewski hires about 30 employees. Most come from outside Alaska. She also orders equipment and all of the packaging and supplies to fill custom orders months in advance.

“So, when COVID was really hitting [last year] and there was all that uncertainty and we were in limbo, you weren’t sure ‘Should I spend this $50,000? What’s going to happen?’”

Uncertainty has always been a part of the commercial fishing business. Nathan Hill remembers when sockeye sold for more than $2 a pound. That was back in 1988. Hill said he also remembers when the industry went bust. Some processors this year said they’d pay over a dollar a pound for sockeye.

Some companies prioritized hiring workers who were already vaccinated in order to eliminate quarantines and the risk of COVID-19 outbreaks during the fishing season. But with a national labor shortage, some still report challenges with recruiting eligible workers.

Both Hill and Wlaysewski said the pandemic made them realize that staying nimble within the fishing industry may be the most sustainable way to operate a business.

“Selling to the bigger processors is great, and they can handle a lot of catch,” Hill said, “but knowing your processor, like Amanda and her company, it’s a different feel. You are more like friends.”

She agreed that the relationship of processors like her with those who fish for salmon, like Hill, is more important than ever.

“We’re individuals,” Wlaysewski said. “We’re not corporations, so it’s like we feel like we’re in somewhat of a partnership together because I wouldn’t have a business without him, and he knows that I know that.”