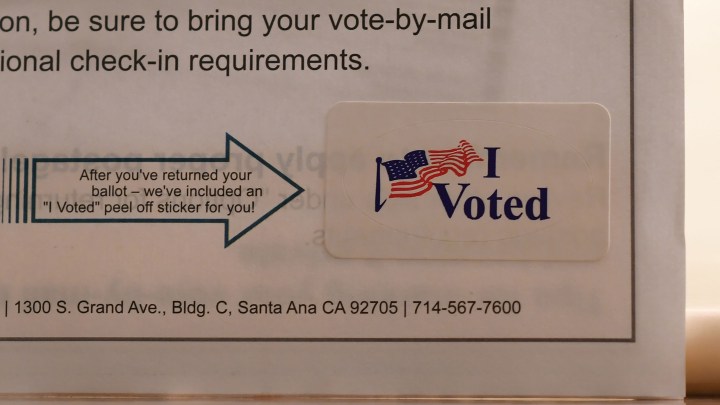 The battleground state of Pennsylvania has already seen millions of mail-in ballot requests and returns, according to data collected by the United States Election Project. That’s due, in part, to a number of legislative changes to the state’s voting laws that made it easier to vote by mail.

It’s a significant jump in mail-in voting for the state overall but also for rural Montgomery County, which saw only 10,000-some mail-in ballots returned in the 2016 general election.

When Pennsylvania held its Democratic primary election in June of this year, the county found itself overwhelmed by the hundreds of thousands of mail-in ballots it received, according to Kenneth Lawrence, vice chair of the Montgomery County Board of Commissioners, who oversees the county’s elections.

“We tried to learn from the primary election, where we had 126,000 mail-in ballots that we needed to count,” Lawrence told Marketplace Morning Report host David Brancaccio. “And it took us 17 days to do that, which we knew was far too long for the general election.”

That’s why Montgomery County recently invested $1.7 million into expanding its vote-counting infrastructure, technology and personnel in the hopes of avoiding a similar scenario.

What follows is an edited transcript of Lawrence’s interview with Brancaccio focusing on the status of Montgomery County’s election count and how officials plan to take on another deluge of mail-in ballots.

David Brancaccio: When you got, I think it was something close to $1.7 million, from your county to beef up systems for a pandemic election, what were your priorities for what you would do?

Kenneth Lawrence: Well, we tried to learn from the primary election, where we had 126,000 mail-in ballots that we needed to count. And it took us 17 days to do that, which we knew was far too long for the general election. So we’ve invested over $1 million in technology, envelope-extractor machines, and then high-speed scanners so that we can count our mail-in ballots much quicker next week.

Brancaccio: I mean, that’s just part of it, right? Just getting the envelopes open. So now you’ll have some technological aid for that?

Lawrence: Yeah, we have over 200,000 ballots back already. And then, of course, we’ll be accepting them until 8 p.m. on Election Day and beyond. So yeah, the first step is just to get them out of the envelopes, to get them out of the outer envelope, and then the privacy envelope, and then they have to be flattened and sorted, and then you begin the scanning. So we can’t begin any of that until 7 a.m. on Election Day.

Brancaccio: Yeah, we should explain that some states cannot start counting mail and votes until Election Day. And among those states is yours, Pennsylvania.

Lawrence: They call that pre-canvassing. This is our first general election with “no excuse” mail-in voting. But most other jurisdictions that I’ve seen allow people to begin canvassing up to three weeks before or even the weekend before. We were hoping that it would be worked out with the governor and the General Assembly to allow us to do that. That did not happen. So we can’t begin preparing the ballots to count until 7 a.m. on Election Day.

Brancaccio: So you’ve got some more technology, what about the troops? You’re gonna need humans.

Lawrence: We have tripled the size of our Voter Services office, a lot of temporary workers there. But you know, we have literally an army of people who have been working in Voter Services. And then of course, we have tabulators, who will start that day as well. We’ve really learned it’s two elections now. It’s the mail-in election and then of course, we have our in-person election too. But you can’t really have the same person doing both things. So we have people that we brought on specifically for the mail-in portion of it. But we’re also preparing for the in-person election as well. Poll workers have been great. We had an issue with that during the primary, but we have more than enough poll workers. And we have tabulators, too. And once we begin counting, we’re not going to stop counting until we’re done. So it will be a 24/7 operation. But I do not believe it will take seven days to do it. But we will count 24 hours around the clock until we get the ballots done, so we’ll have different shifts of people coming in to help with that process.

Brancaccio: You know, along with everything else, you’ve got to keep your ballot counters socially distant, right?

Brancaccio: You know, people keep thinking of, “Well, I wonder what the result is gonna be on election night.” It’s almost the wrong way to frame it this time around.