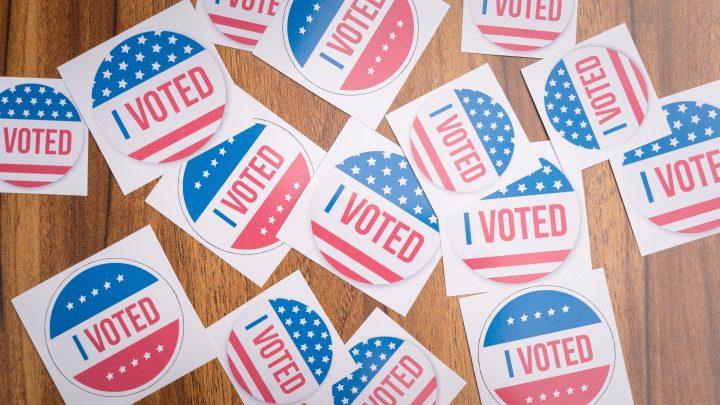 It’s round, usually reflects the American flag’s color scheme, and it’s become the most popular visual shorthand for showing you’ve performed your civic duty: The “I Voted” sticker. Selfies of people sporting the sticker have likely populated your social media feeds as Election Day approaches.

This year, with more people voting by mail because of the COVID-19 pandemic, the sticker has become an even more important symbol, said Mia Costa, an assistant professor of government at Dartmouth College.

“If you go to the polls on Election Day, you feel like you’re part of this great big movement, and everyone’s doing it that day,” Costa said. “Because so many people this year are voting early, I feel they still want that little badge of honor. People want to feel like they’re still connected to that day.”

The costs and payoff

Costa noted that it’s not entirely clear whether the “I Voted” sticker on its own has a measurable effect on encouraging others to vote. She said to determine that, you’d want to observe the voting patterns of people who have — and haven’t — been exposed to the sticker, which is difficult because you can’t control what people see in their daily lives.

But there have been experiments that have approximated the effect of items like it and studies that show, more generally, how social pressure can increase voter turnout.

One example Costa points to is a secret experiment conducted by Facebook a decade ago when the social media giant allowed users to click a button sharing whether they voted. (Kind of like a digital test of the “I Voted” sticker, she said.)

According to Facebook scientists, people were a little more likely to vote if they saw their friends had voted. They claim the digital sticker and the peer pressure caused 340,000 more people to vote in the 2010 midterms.

When it comes to cost, the price of an “I Voted” sticker will vary by region, but they all typically run cheap. Eve Peña, the outreach assistant manager for the San Francisco Department of Elections, said the last set of stickers her department ordered cost around 7 cents apiece.

At places like LabelValue.com, a roll of 500 “I Voted” stickers can cost just under $14, meaning each sticker amounts to almost 3 cents. Purchased in bulk, the cost goes down to as little as 1 cent each.

The amount does add up, though, when you have hundreds of thousands of prospective voters.

Santa Clara County in California said it saved more than $90,000 in 2012 by not including them in mail-in packets, while Long Island, Suffolk County’s elections commissioner in 2018 lambasted the stickers by saying they didn’t want to spend “$20,000 in taxpayer money to distribute adhesive participation trophies.”

But Costa thinks the investment in stickers is worthwhile.

“I think governments should do anything and everything to increase turnout,” she said.

The origins of the “I Voted” sticker are rather murky, although the general consensus is that they gained popularity in the 1980s.

Time Magazine, which chronicled the sticker’s history, found its earliest mention in a 1982 Miami Herald article discussing how small businesses in Fort Lauderdale, Florida, were giving discounts to people who wore them. (An incentive from companies that still continues to this day.)

The Phoenix Board of Realtors took credit for developing an “I Voted Today” sticker in 1985, while the elections-supply company Intab says it designed the popular oval sticker with the billowing American flag in 1987.

Regardless of where it originated, the image has evolved, with different cities and counties putting their own spin on the sticker and adapting them to reflect their values.

Peña, from the San Francisco Department of Elections, said that whenever a new language is added under the area’s Language Access Ordinance, it’s also reflected on their “I Voted” sticker. Spanish, Chinese and Tagalog are all currently included on it, along with English.

“The fact that our sticker is multilingual is something that we take pride in as a department,” Peña said.

The demand for the “I Voted” sticker

Sites like LabelValue.com will sell these types of stickers directly to consumers, not just government officials. Josh Dickson, the director of digital marketing for the company, said its customers are nationwide and include election supervisors, county clerks and schools.

Dickson said they’ve sold more than 6 million “I Voted” stickers this election year —  a nearly 35% increase since the 2016 election. He said one of the reasons he thinks there’s been an increase is because elections offices expected record turnout. (More than 91 million Americans have voted early this year thus far, surpassing two-thirds of all ballots cast during the 2016 presidential election.)

San Francisco started including them in all mail-in ballots this year, beginning with the primaries.

Peña explained that they wanted to provide everyone with the chance to show their “pride in voting.” For this presidential election, San Francisco has sent out more than 541,200 mail-in ballots with stickers.

But while San Francisco has taken the initiative to include them, other areas — like Massachusetts — have opted not to include stickers with its mail-in ballots. The rise in voting by mail means some haven’t been able to get their hands on the coveted sticker this year.

To fill that void, Dickson said LabelValue mailed out stickers this year to those who weren’t able to receive any.

And one New Jersey man is making it his personal mission to get them in voters’ hands. Greg Sarafan, the founder of the Voter Sticker Project, is doling stickers out to people who request them via Twitter.

Please tell all of your friends voting on or before election day, to *stay in line* and when they are done if they don’t get an I Voted sticker, to DM me for one. I still have 1000s of stickers to mail out to voters who earn them. Pass it on. pic.twitter.com/XFaMcRL0xt

Sarafan noted that many of those who have messaged him for stickers say they haven’t voted for a long time and want one to remember the election by. Over the past couple of weeks, he’s distributed about 1,500.

“It’s just that little bit of joy that you get from voting in physical form,” he said. “A lot of people that I give them away to tell me that the whole process of voting didn’t feel complete without the sticker.”