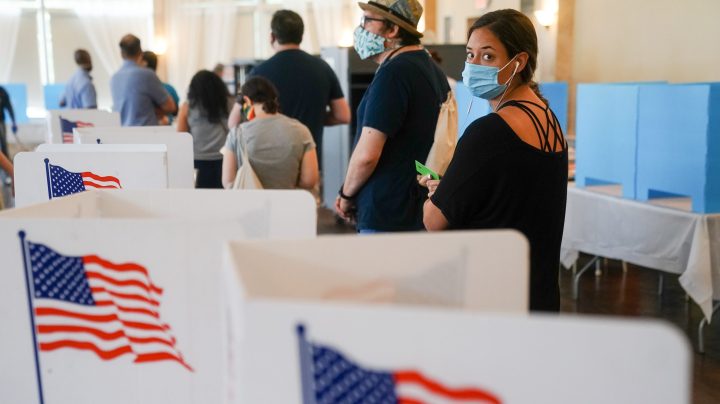 COPY
Even with record-breaking early voting, it could take some time to know who won the presidential election this year. Elijah Nouvelage/Getty Images
Elections 2020

Even with record-breaking early voting, it could take some time to know who won the presidential election this year. Elijah Nouvelage/Getty Images
Listen Now

It’s likely we won’t know who won the presidency on Election Day this year, and some people are concerned about the possibility of a contested election. Last week, Fitch Ratings wrote in a report that it will be watching the election for “any departure” from the U.S.’s history of accepting election results and the orderly transition of power. If there’s any departure from this norm, it could affect the country’s AAA credit rating, which influences the interest rate the U.S. pays on its national debt.

All the uncertainty surrounding this presidential election could affect the economy in other ways, too. “Marketplace” host Kai Ryssdal talked with Wendy Edelberg, a senior fellow at the Brookings Institution and director of its Hamilton Project, about what might happen. The following is an edited transcript of their conversation.

Kai Ryssdal: So broad brush, lay it out for me. We have been told that we’re probably not going to know who won the election on election night. What do you think that means writ large for the American economy in the next two months?

Wendy Edelberg: I suspect it means that it will take too long to get the kind of fiscal support that we need to support this really fragile recovery. And that frustrates me because doing it now is too late. Doing it a month from now is much too late.

Ryssdal: So I will stipulate that that is a thing that could or will happen on election night or afterward. What happens if it becomes contested and challenged and acrimonious?

Edelberg: So right now, measures that tell us how uncertain things are for businesses, for investors, for households, those measures are through the roof. And uncertainty is generally really bad for economic activity. It prevents firms from putting investments in place and expanding and putting in hiring decisions. And it prevents households from making decisions about the future. And we’re just going to create one more really significant headwind if November and December, for that matter, is that much more an environment of uncertainty, layered on top of the immense uncertainty we have because of the pandemic.

Ryssdal: I say on this program all the time, and regular listeners know this, the stock market is not the economy. I do wonder though, beyond the real economy measures that you have laid out in that answer, what do you imagine stock markets will do? Just because a lot of people look at that as an indicator.

Edelberg: So you’re absolutely right. The stock market is not the economy and the stock market is giving us all sorts of incorrect signals right now. And it wouldn’t really surprise me if it continued to give us really incorrect signals. As much as uncertainty and a contested election would be really bad for small businesses, for individual households, it may well be good for some of the large firms that are driving the stock market gains. That’s really hard to know. And I’m also guessing that people who hold equities are pretty aware of the issues that you and I just talked about. And so my thought is that that’s mostly baked into the stock market. And so those investors are expecting things to be pretty chaotic for a couple of weeks after the election, and I would expect things to basically move sideways, which is to say the flip side, that if we get a clear outcome, and uncertainty is largely resolved very quickly, yeah, I can imagine that being fabulous for the stock market.

Ryssdal: Huh. Let me point out that if he loses, President Trump will still be president for two and a half months, right, Election Day to the 20th of January. Contested election aside, challenged election aside, random tweets aside, he’s still the president with full executive authority to influence this economy.

Edelberg: So maybe this means that with all of these issues leading up to the election off the table, because that uncertainty is resolved, I don’t know, maybe we can hope, maybe policymakers will then come together and do the right thing. I’ve been asked before, “What would you tell policymakers on January 20th to do to support our economy?” And the first thing I’ll say is get in a time machine and go back six months to support the economy then. So I have grave concerns about policymakers waiting until January to pass the kind of fiscal support that the economy needs right now.