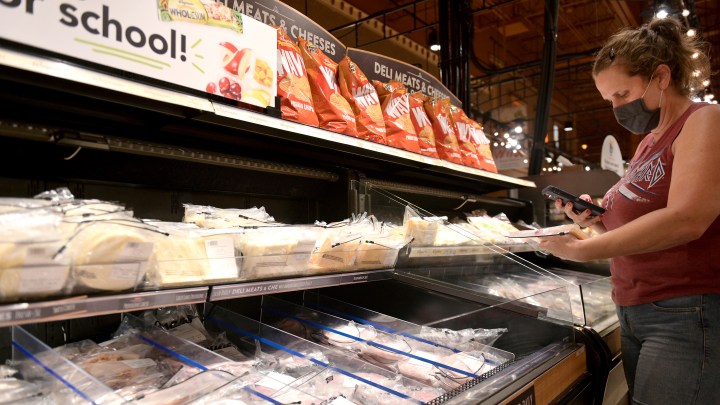 We’ve had some fundamental changes in the way we do things during the pandemic. We’re more likely to order groceries online for example, and increasingly order everything else and expect it to arrive the same day.

For Paul Goldenberg of San Diego, it was at the height of stay-at-home orders in March when it started.

“When everyone was going crazy over toilet paper and Lysol and all that stuff, I turned to Instacart,” he said.

The app connected him with a shopper who brought him what he wanted from an out-of-the-way Albertsons. Then there was this 96-degree day, “when my dog soiled some sheets on my bed. And I just knew that I was … going to have to get to the store — with the whole heat thing and the mask and all that,” Goldenberg said.

So it was back to Instacart for cleaning supplies and new sheets, this time from Walmart. Goldenberg was already an online shopper; he’s bought lots of stuff from Amazon.

But Instacart is different. The app launched as a way to get someone else to do your grocery shopping. Now it matches up gig workers with all kinds of same-day shopping errands.

Instacart has added over 100 stores during the pandemic, including some that were all about the experience, like Sephora.

“In certain cases, it’s a connection to a brand,” said Nick Shields, an analyst with Third Bridge. And right now, for stores that are struggling, like Bed Bath & Beyond, he said this is another way to stay relevant with customers.

“They open the Instacart app to buy groceries, but also they’ll buy some pillows and towels and things like that,” Shields said.

Of course, many stores already offered shipping, but because of Amazon, no one wants to wait.

“The logistics of doing something like same-day delivery for a relatively small outfit like Sephora —  it’s really hard for them to do that,” said Jeffrey Galak, associate professor of marketing at Carnegie Mellon University.

Especially at a time when lots of retailers don’t have cash for that.

“They don’t have a choice really; they have to partner with someone else to build out that system for themselves,” Galak said. “For every retailer to go out and do that, that’s impossible.”

So consumers are willing to pay a delivery charge and provide a data drip, because now Instacart knows what their weekly grocery list looks like, what their kids are wearing for Halloween, what over-the-counter medications they use.

That means retailers have to share that precious shopper data.

And it might be worth it to retailers, said Camilla Yanushevsky, an analyst with CFRA Research.

“We think that the habits that were formed during COVID-19 cocooning will stick even after the pandemic subsides,” she said.

“They’re wearing their masks. They’re going to the store. I’m not going into the store, they’re bringing stuff to my door. I’m giving them a tip,” he said. “It’s a nice arrangement.”

And he said it’s probably an arrangement that’ll stick.