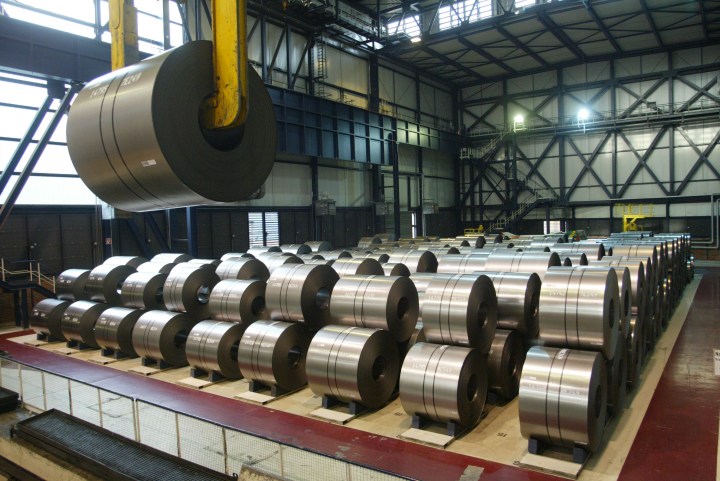 We’re a couple days away from being 18 months into the Trump administration’s trade war, using steel and aluminum tariffs as the start date. The trade war looks different now than it did a year and a half ago, so Kai Ryssdal called Lisa Goldenberg to see how things are going. She’s the president of Delaware Steel Co., based in Fort Washington, Pennsylvania. The following is an edited transcription of their conversation.

Lisa Goldenberg: I would give it a fair. It’s kind of a struggle. Things are quiet. I think manufacturing slowed down a lot. Between tariffs on, tariffs off, more tariffs, fighting with the Chinese, agriculture’s upside down, and now, of course, this week we have auto workers on strike. So none of those things fare well for the steel business. Prices are just tumbling every day lower, lower, lower.

Ryssdal: Tumbling is not what I expected to hear you say, although, you know, now that you say it, it kind of totally make sense.

Goldenberg: Yeah. A friend of mine coined the phrase — I don’t know if she owns it or not, but I think it’s been trademarked — “steelmageddon.” Kind of dramatic, but I give credit to her. I think now Bank of America probably owns the term. But it feels that way. I think that prices are just very soft. And for a person like me who’s in distribution, I hold a sizable inventory. Every day I’m pretty much selling steel at losses, trying to buy new and average out, and some days I do that better than others, but I’m burdened by expensive inventory.

Ryssdal: Why is your inventory so expensive? Because you had to buy it back when the tariffs were first in and prices were higher?

Goldenberg: Correct. And when the tariffs went in, as you and I have discussed, they were done kind of haphazardly, without a plan, without notice. And therefore, the market just ran up like crazy, almost a panic. It’s very extreme.

Ryssdal: Is this now the new normal for you then? I mean, are you settling in?

Goldenberg: Jeez, I hope not. I want to be optimistic and say that we need to kind of grind out the balance of ’19 and look towards 2020 as improving. I think that once we get some sort of trade policy, which I’m hopeful we should get something, it’ll really improve agriculture. I mean, this has not fared well for farmers at all. And a lot of steel goes into agriculture.

Goldenberg: Well, I’m only hopeful because I need to be. I don’t want to function in a world without a trade policy. I don’t know if the administration is going to be bogged down and not be able to come to any sort of compromise. I think in ’16, when you and I really started talking about this administration, and I was saying that I thought that improved trade policy and infrastructure were the two things that if I had to be hopeful about something in this administration, that’s what it would be about. So far, nothing, but hope reigns eternal.