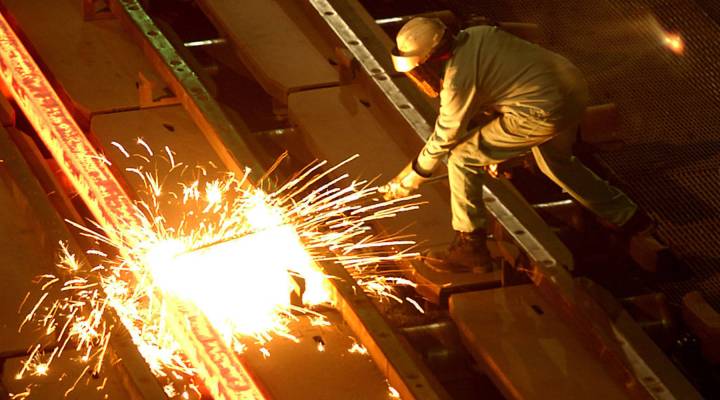 COPY
The war in Ukraine and ongoing inflation may be negatively affecting the steel market. David McNew/Getty Images

The war in Ukraine and ongoing inflation may be negatively affecting the steel market. David McNew/Getty Images
Listen Now

Last year, Lisa Goldenberg, the president of Delaware Steel Company, talked with us at “Marketplace” about the state of the steel market. Business was good back then. Now, due to possible lifting of tariffs on China, the war in Ukraine and, yes, inflation, the steel market seems to be going through a rough patch.

Our host Kai Ryssdal checked in with Goldenberg, asking what’s next for her business and her industry. The following is an edited transcript of their conversation:

Kai Ryssdal: Why, Lisa Goldenberg, it has been forever.

Ryssdal: Good. Good. I’m glad to hear it. So look, here’s the full disclosure part of this interview. We first started thinking about getting you back on the phone like six weeks ago, when the whole thing about China tariffs, and will the Biden administration get rid of them, and how do you feel about tariffs. But now honestly, I mean, we can get to tariffs later if you want to. But, honestly, the vibe now, economically speaking, is a little bit different. And I wonder, first of all, what your sense is, as a woman in the heart of American manufacturing.

Goldenberg: Well, the down and dirty quickie is: It’s kind of too soon to tell. There’s a shift. And when you’re standing in the middle of the shift, you don’t know where this is going. There were signs of this in February, as we approached the war in Ukraine, and then the market really took off and things got hot. It sort of kicked the can down the curb a little bit, if you will. You know, people are nervous. I just, on my way before this interview, filled up my car, which I know for LA standards is not crazy, but it just cost me $150 to fill up my car. And thank goodness, for me, that’s doable. But that’s a real thing.

Ryssdal: Do you have recession fears? Not you personally as a consumer in this economy, but as a woman running a company, right? You’re a CEO, you’ve got to make some decisions. Is that influencing what decisions you’re making?

Goldenberg: No, not yet. I wanted to think about that. But I’d like to say yes. You know, I’m planning now for the future. But the real truth is, no, I’m living in this moment. And I’m feeling the anxiety, I see signs of slowing down, but on a day-to-day basis, no, I’m not planning for what might come down the road. And, you know me, I’m, like, eternally optimistic. So, yeah.

Ryssdal: But you’re also … I mean, you are an optimist, right. And there’s generally a positive tone to the things you and I talked about. But you’re also a realist who’s been in this for a long time and you’ve seen ups and downs. And I guess I’m a little surprised that you’re not a little more cautious, I guess?

Goldenberg: I would say definitely cautious. But you said planning for the future. I’m definitely looking on the horizon, hard. And I think the fact that in February, things were getting kind of crappy and then we got this little bump, does not give me a false sense of security, but sort of like a nudge, like you’re given a shot. But you know what’s coming, that kind of thing.

Ryssdal: We should talk about the “little bump” that steel got in February. And I’m assuming here you’re talking about the invasion of Ukraine and what that has meant for you and your line of work. Explain that a little bit.

Goldenberg: So what it means is that we do not have a war economy in this country, thank goodness. And it’s not the old adage, as was said the other day, by some people on the Hill, that, you know, it’s a matter of national security that steel is … that we’re not building warships. However, it is a world economy. And when you take out major players, anything that destabilizes the world economy affects steel, affects all of us. So that bump that occurred with the war in Ukraine, really, as European markets scrambled to fill orders of steel that they weren’t going to get, or of other items they weren’t going to get, that needed to ramp up manufacturing in those countries as things became, you know, destabilized.