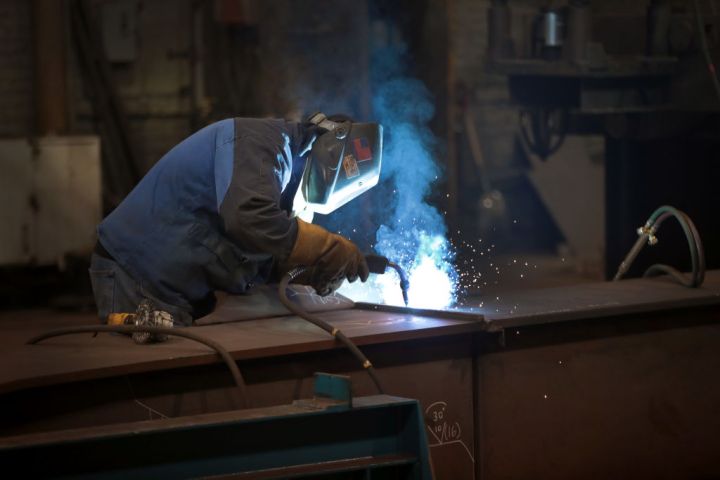 COPY
"Suppliers are making steel as fast as they can," Lisa Goldenberg says. Lead times are the "longest they've been in probably 15 years." Scott Olson/Getty Images

"Suppliers are making steel as fast as they can," Lisa Goldenberg says. Lead times are the "longest they've been in probably 15 years." Scott Olson/Getty Images
Listen Now

For Lisa Goldenberg, president of Delaware Steel, business is great. “The market is in a massive overdrive,” Goldenberg said during an interview with “Marketplace” host Kai Ryssdal. “It’s one of those rare, exciting times.”

In its latest monthly survey of the U.S. manufacturing sector, the Institute for Supply Management saw U.S. manufacturing surge to a three-year high and noted that steel prices were rising. According to Goldenberg, that means companies that manufacture with steel have had to pass costs down to customers, or else. “It’s not always a good time for everybody at the same time,” she said.

The following is an edited transcript of Goldenberg’s conversation with Ryssdal.

Kai Ryssdal: How is business at the Delaware Steel Co. right now?

Lisa Goldenberg: Business is great. We are in one of those rare upswing moments. I think you and I spoke a couple times, actually, in 2018. And we’re kind of there again. Things are crazy, the market is in a massive overdrive. And it’s one of those rare, exciting times.

Goldenberg: Well, for everybody, it’s strong. Suppliers are making steel as fast as they can. They have what we call lead times, which is how long it takes to get to the customer; [they’re] the longest they’ve been in probably 15 years, even though technology’s improved. It’s not a criticism of their production. It’s just that their order books are that backed up. On the customer side, of course, they’re moaning and groaning at the prices. To the extent that they can pass it on, they do. And when they can, they sort of make the same money either way because they’re passing on that margin. To the extent that they can’t pass on the margin where they’re locked into contracts, it’s a painful time. It’s not always a good time for everybody at the same time.

Ryssdal: Let me ask you to back up to that thing you said about your industry really being in overdrive. This economy is going to heat up as everybody gets their shots and things reopen, and consumers have a lot of money. How worried are you about all this pent-up demand sort of overheating things?

Goldenberg: I’m not worried at all, Kai. I think that the economy has been going well. I think it could overheat. But when we say “overheat,” what do we mean? We mean inflation. Well, the cost of money is so low, and all this printing money is a lot. It’s huge. But in relative terms, for the first time, we have people generating savings in this country in, what, since the ’80s? When we’ve talked about heating up the economy in the past, we had a lot of money sitting on the sidelines, doing nothing, whether it’s in consumers’ pockets, wherever. We’re coming from a place of people having no money.

Ryssdal: It is so interesting to hear you, an actual practitioner in this economy, saying all this stuff about inflation, not worrying about it as opposed to all the academicians and some of the policymakers saying, ‘Oh my goodness, inflation is gonna kill us.’

Goldenberg: Well, I think it’s scary. But, you know, stating my age or whatever, the year I went to college, the interest rate on the money my parents, you know, put in the bank was 17%, if I put it on a credit card. So we’ve now lived for a long, long time at negligible interest.

Ryssdal: So in a nutshell here, just to let you get back to actually running your company, you’re feeling pretty good.

Goldenberg: Things look pretty good. I think that for my industry, this will die down somewhere in the summer because the prices are so high that imports are going to come into the country, even though we have tariffs. But I think that for the economy, my timing is off. We spoke right after our former president was elected, and I said the one thing that I expected was an infrastructure bill that everyone could agree on. Well, I was wrong by, you know, four years, but I think we’re gonna get one. And I think that putting people back to work, that has to be addressed. I think that there’s a line in the sand that I’m very optimistic about. Very optimistic.