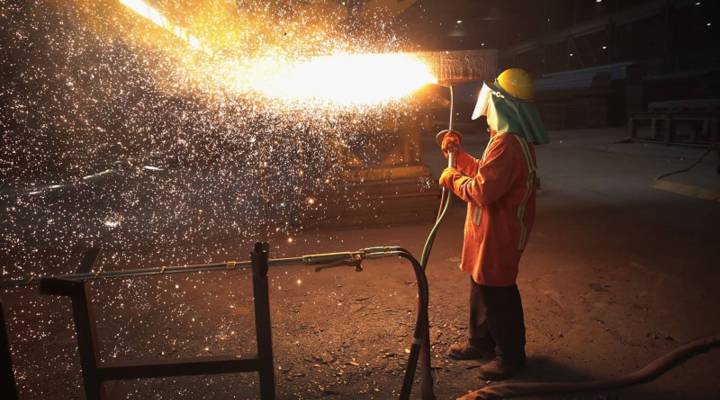 We’ve been hearing a lot from people at companies who oppose the tariffs and poured time into trying to get exemptions from them. But for steel producers, this era of trade war isn’t so bleak. With new tariffs looming, Marketplace host Kai Ryssdal checked in with Lisa Goldenberg, president of Delaware Steel in Pennsylvania, who has enjoyed better business since Trump’s original tariffs on steel and aluminum imports went into effect in March. The following is an edited transcript of their conversation.

Kai Ryssdal: So we had you on in April not long after the tariffs went into effect. You said life was pretty good, prices had gone up, you were doing well. How are we now, what, six, seven months later?

Lisa Goldenberg: I would say pretty much about the same. The last couple weeks, we’ve seen a slowdown, some of that seasonality and some of it is kind of the reality of the new reality setting in.

Ryssdal: I don’t even know what that means, the reality of the new reality. Help me understand that.

Goldenberg: Well, usually when tariffs or other instruments go into place, you have time to go to the bank to ask for money. You don’t want to go to the bank after you need the money. You try to go to the bank before you need it. So now you’ve been paying for steel for a couple of months at a lot bigger prices. You’re waiting to get paid by your customers and cash is tight for a lot of people.

Ryssdal: So there’s an inventory question I want to ask you as well, too, right? You were able to buy a bunch of stuff cheap-ish and then sell it for expensive, sell it for high. What do you do now if you need to build up your inventory though?

Goldenberg: Well, I’ve been sort of in a maintaining inventory mode, and we’ve been able to pass on the increases for the most part. And I think that that’s kind of coming to an end and narrower margins are around the corner.

Ryssdal: Can this last, do you think? I mean, even the reality of the new reality and whatever, can the current situation endure?

Goldenberg: Tariffs at 25 percent cannot endure. It’s not a way to operate in an international global community. I think that something else is going to emerge. As we begin to negotiate NAFTA and some other agreements, some of this will not need to endure. And as I’ve kind of been telling people, the tariffs were put in place across the board very dramatically and aggressively, though our relationships are really different. You don’t treat a sibling the way you treat a neighbor, the way you treat a casual acquaintance.

Ryssdal: Even though they were, as we’ve agreed, haphazardly put into place, do you agree with the fact of the tariffs to begin with? Do you think they were necessary?

Goldenberg: Like you would do anything for your spouse or your kid, I would do anything for American manufacturing. I believe in it wholeheartedly. And I want to give it the best advantage possible. This particular president is determined to create a much more fair playing field, and I commend that. I really do. I don’t necessarily agree with the style, the direction, but something had to be done. So yes, I am a supporter. If your trade partners are not fair and equal, then we ought to negotiate for our own behalf and not necessarily only the greater good. I think where we’ve gotten ourselves into trouble is we’ve put others ahead of ourselves and been sort of like the benevolent party at the table looking to care for all members and not taking good enough care of ourselves.