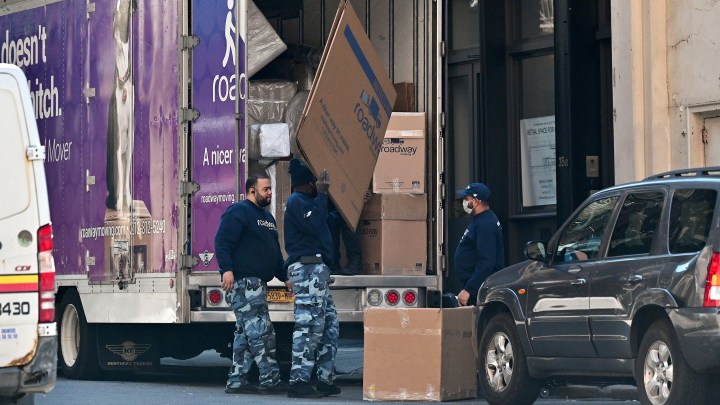 COPY
"Fourteen percent of those that move with us are saying one of the primary reasons was due to COVID,” said Tricia Schuler, marketing director for United Van Lines' parent company UniGroup. Above, a moving crew loads a truck in Manhattan in March. Dia Dipasupil/Getty Images
COVID-19

"Fourteen percent of those that move with us are saying one of the primary reasons was due to COVID,” said Tricia Schuler, marketing director for United Van Lines' parent company UniGroup. Above, a moving crew loads a truck in Manhattan in March. Dia Dipasupil/Getty Images
Listen Now

Shemoore Preston lives in Queens, New York, which was really scary in the early months of the coronavirus pandemic when it was an epicenter of the virus — and is getting scary again as new cases rise. Preston, 24, just finished college and is looking for jobs someplace less crowded, maybe on the West Coast.

“I think if I move to another city, there will be more space,” he said. “I’ll have more ability to not be around people so much, compared to how New York City is, especially on the subway.”

According to the latest Marketplace-Edison Research Poll, 22% of Americans have moved or permanently relocated in the past six months, or are considering doing so in the next six months. Among that group, almost a third said one reason was to move away from an area impacted by COVID-19.

That squares with other recent research. One of the country’s largest moving companies, United Van Lines, has been asking its customers whether COVID-19 is a factor in their moves.

“What started as like a 5, 6, 7% back in March, April, is now up to 14%, so 14% of those that move with us are saying one of the primary reasons was due to COVID,” said Tricia Schuler, marketing director for parent company UniGroup.

Health isn’t the only concern, she said.

“I think it’s also … this newfound freedom for many people that now can work from anywhere,” Schuler said. “They’re picking up and moving wherever they want to, for the first time ever, where they’ve had this ability to do so.”

In the Marketplace-Edison Research Poll, nearly half of people who had moved or thought about moving said the ability to work from anywhere was a factor.

Not everyone has that flexibility though. More than a quarter of people surveyed said losing a job or income played a role in a move or potential move.

Overall, younger adults were the most likely to relocate, with 27% of 18- to 34-year-olds responding that they had recently moved or were considering moving. Back in June, Pew Research Center found that about 1 in 10 of adults under 30 had moved because of the coronavirus outbreak.

“That’s logical because, of course, they’re among the groups most affected both by job losses in the economy and also by the shutdown of college housing where many were told to leave their dormitories,” said D’Vera Cohn, a senior writer and editor with Pew.

Even moves that weren’t caused directly by the pandemic may be influenced by it. Fernando Villagran, 59, needed a larger space in Alexandria, Virginia, so that he could take care of his elderly mom while working from home.

“I lived in a two-bedroom condo, so bringing my mom in there with her cat and my dog … it wasn’t going to happen,” he said.

Now he has a home office, along with more outdoor space. And as a bonus, he said, he’s not so close to the neighbors.