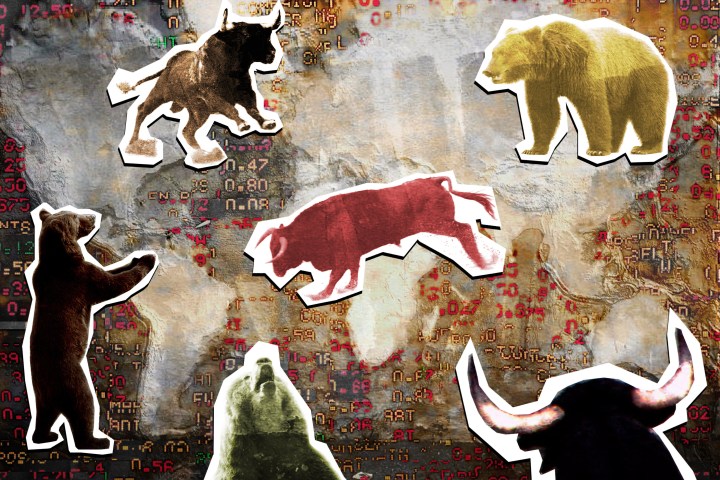 Have you ever noticed how often animals are used to describe what’s happening in the stock market or economy?

Bulls, bears, swans, unicorns — those are some of the more well-known ones. But there are at least 130 others that have become features of financial jargon.

A new book called “Bear Markets and Beyond” explains the trend makes sense because images were one of the first ways humans learned to communicate in writing. But now that “dead-cat bounce,” “dogecoin” and “fishbone analysis” have worked their way into our lexicon, the book’s author, Dhruti Shah, says learning to break down the Wall Street lingo is crucial to improving financial literacy across all ages.

She spoke to the BBC’s Victoria Craig on the global edition of the “Marketplace Morning Report.” Below is an edited transcript of their conversation.

Dhruti Shah: This year with coronavirus, the word “hamsterkauf” started popping up globally. It’s a German word for hamster purchase, and it’s been used to describe all that stockpiling that’s been going on. Other newfangled terms include “meerkat,” which is a very hyper-alert investor. They’re very, very different from “ostriches,” who just want to keep their head low.

Victoria Craig: There are 130 animals that you’ve listed in this book. How did this Wall Street-speak evolve over the last several decades?

Shah: We did a lot of research, looked into the etymology. The bears and the bulls, people think that that originated in the 18th century when bears and bulls were pitted against each other in staged fights. And you’ve got the bears going down in the market, bears swatted downward with their paws. Bull struck upward with their horns. So you see, a bull market, that’s a rising market. The word “piggy bank,” that goes back to 1450 from our research. Before banks, people would like stash their cash at home in these earthenware pot called “pyggs.” Now, people love using animals. It makes business so much more fun.

Craig: This is a fun book. But these terms are important for people to really understand. Because business and economic literacy is crucial, not just to understanding things you read in the paper or hear on the radio, but also your own personal finances.

Shah: Yes, the book is about encouraging financial confidence. It’s about making sure that people don’t feel scared and they can understand all of that language that’s being used around their money. Now, if your money is in a pension, then what sort of investor have you got working on your behalf? Financial literacy is a huge issue in a post-COVID economy. One in three people are financially illiterate around the world. Last week, a report actually came out suggesting that 89% of Americans surveyed suggested that a lack of financial education leads to bigger social issues: poverty, a lack of job opportunities, wealth inequality. There are so many surveys showing that across Europe, Asia, Latin America, everywhere, that if you’ve got low financial literacy, you’re going to have more problems with your young people, with everybody. The whole point is to make it not scary for families to have conversations. So the book works for those who are in the know — they can laugh at the quizzical “sheep” investor — but it also helps those who want to be in the know.