The economic disparity between minorities and white Americans has manifested itself in a variety of ways, such as gaps in employee diversity, wages and minority-owned businesses.

A new study from Deutsche Bank shows Black and Hispanic Americans are also experiencing a “racial tech gap,” which could threaten their future ability to gain meaningful employment and grow wealth in a digitized economy, according to Deutsche Bank Global Technology Strategist Apjit Walia.

“The staggering divide in the numbers we found was when it came to race, especially in urban areas, with Black and Hispanic communities 10 years behind the white community for the last 20 years,” Walia told “Marketplace Morning Report” host David Brancaccio.

Combine that with the rapid digitization and automation of the U.S. economy, and that gap could eventually mean large numbers of Black and Hispanic American workers could be disqualified or underprepared for 86% of jobs in the U.S. by 2045.

Below is an edited transcript of Walia and Brancaccio’s full interview on the racial tech gap and how we might be able to narrow that gap with targeted investments for minority middle-school students and their families.

David Brancaccio: How do you define this divide, as you see it? You have many layers of this.

Apjit Walia: So the digital divide has been going on for quite some time, it’s well telegraphed. We approach a study holistically seeing what’s the difference between different spheres in the society, whether it’s rich or poor; urban, rural; educated and uneducated, and obviously based on race. And we found, the staggering divide in the numbers we found was when it came to race, especially in urban areas, with Black and Hispanic communities 10 years behind the white community for the last 20 years. And it’s a divide which has persisted and continues to persist. Obviously, with the COVID [pandemic], the litmus test and what the divide can do to society came true. And that’s what we try to highlight: Whether it’s access to connectivity, whether it’s access to hardware, and, of course, access to training, which is all interconnected, large swaths of society in the country, especially people of color, remain behind.

Brancaccio: Just so we fully understand this, if current trends continue, Black people and Hispanic people will attain the level of digital connectivity of white people in 10 more years.

Walia: Yes, the gap continues to be the case. And, you know, as we continue to persist from broadband access, the gap by this point in time is about 10 years.

Brancaccio: All right so, broadband connectivity, but also you talk about hardware. It’s like what kind of device that a family can afford and bring into the home?

Walia: Yes, we spoke to a lot of historically Black colleges and universities professors and [gathered] anecdotal data where you have a family of four and with one laptop, and then you have to decide who does the homework in today’s day and age. So there’s a lot of anecdotal data which corroborates what we’re seeing, that not having access to connectivity and [not] having access to hardware is creating this gap. In today’s day and age, especially when people are expected to work from home or to consume from home or to educate from home, it is not equitable in any form or manner, especially in the urban cities.

Brancaccio: So not just talking about who has the very latest microprocessor in the laptop? It’s that if you have a family of, for instance, several learners in the home, but they have to share, that sets people back.

Walia: Absolutely. And the hardware part is the simplest part to fix, because, for a billion dollars, you can provide this equipment to families. The part which sets people back the most is access to training. Most professors we spoke to felt that the digital inequity, which starts early in life, especially middle school, is what sets people back the most in the digital generation. And lots of kids, when they come to college, by that time, [it’s] the first time they’re exposed to coding, compared to children from other families where they’ve had a lot of exposure. And that gap takes a long time to fill. That’s where we feel, whether the biggest investment or biggest thinking, has to come through to address that.

Brancaccio: That’s where you might target an intervention to middle-school students?

Walia: Absolutely. That’s the plan we looked at. It’s not complicated. It’s fairly simple. With $15 billion, we believe, providing connectivity for a period of five years, providing a gadget, one-time gadgets to families and then provide training for children in middle school and high school on basic computer literacy and coding, we believe that’s the bottom-up way, the holistic way, to start trying to address the divide, as we get more and more digitized over the next generation.

Brancaccio: There’s a lot at stake. I mean, what is the economy for? It’s about people’s livelihoods and well-being. And you forecast that in about 25 years, if these issues are not remedied in some way, you have a lot of people, especially Black people and Hispanic people, who are not prepared for the work that is on offer?

Walia: Yes, the way digitization is going, and we try to keep a conservative forecast — some people say it might be faster as things start to get digitized and get elliptical — we believe in 25 years, or one generation, you have eight to nine jobs in the country which will require medium- to high-level digital skills. And at current point in time, 60% of Hispanics and 70% of Blacks cite being underprepared with digital skills, and so this is not addressed. We’re looking at large swaths of the population being either shut out or being underprepared for the jobs which will require these skills.

Brancaccio: Now you said there are other forecasts — that, maybe, in fact, you know, your estimate is low, right? Because the pace of technology moves forward. And we’ve done other coverage about the disruptive nature of artificial intelligence, robots and automation in the workplace. If that really continues to take hold, it could leave even more people behind.

Walia: Absolutely. You know, it’s very hard to sit here and predict, every decade, what the next decade would hold. And that’s why we try to keep a centered forecast. It could happen faster. Usually technology surprises you more on the upside than the downside, so, yes, it could happen sooner than 25 years.

Brancaccio: What do you think, Mr. Walia, is this study a proxy for where people live geographically, or is it a proxy more for income and poverty?

Walia: I think a bit both. But the intersects in our study — whether it’s from income, from race, [from geography], and urban was highest, of course, education levels, as well. And we found that families of color fall in these categories the most, especially in urban areas.

Brancaccio: So this is implicit in everything we’ve been talking about, but the idea is, as people think about ways of addressing persistent racial inequalities, the technology piece has to be addressed, you would say?

Walia: In a day of digital digitization, it is one of the most important parts of society, and having access to tech — we did studies on this — that having access to training in tech has a clear correlation to jump in income. And the highest jump we found in our studies was among Black and Hispanic communities, once they have access to technology and training. 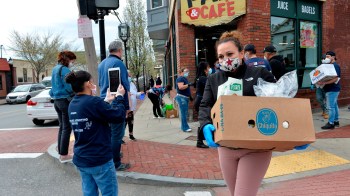