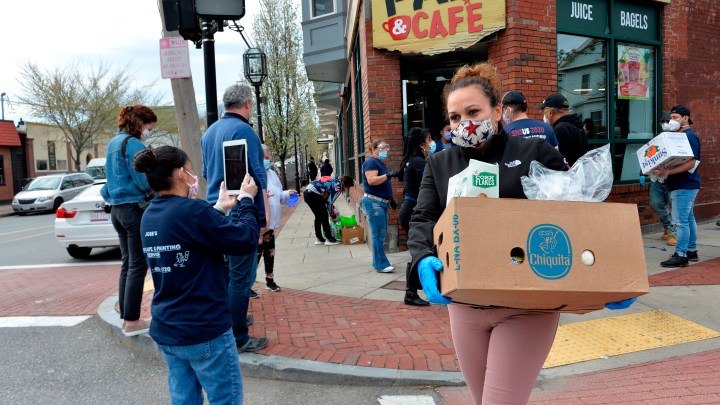 COPY
About 61% of Hispanic households have suffered a partial or total job loss, compared with 44% of black, and 38% of white households. Joseph Prezioso/AFP via Getty Images
COVID-19

About 61% of Hispanic households have suffered a partial or total job loss, compared with 44% of black, and 38% of white households. Joseph Prezioso/AFP via Getty Images
Listen Now

The economic pain is wide and deep, but it’s not spread equally. That’s according to two new reports that show the worst job and income losses are happening to black and Hispanic workers.

A Pew Research Center survey asked people if they or someone in their household had lost a job or taken a pay cut due to the COVID-19 outbreak.

“Hispanic adults are being hit harder in this regard,” said Kim Parker, director of social trends research at Pew.

Parker says 61% of Hispanic households have suffered a partial or total job loss, compared with 44% of black, and 38% of white households.

The JPMorgan Chase Institute has a new report that finds significant racial gaps in people’s financial capacity to deal with sudden job or income loss.

“The kind of cash buffer that households have in their bank account, blacks and Hispanics actually have significantly lower levels of assets,” said Diana Farrell, the institute’s president.

Farrell says that for every dollar of emergency cash a median-income white family has set aside, a Hispanic family has 47 cents, and a black family has 32 cents.