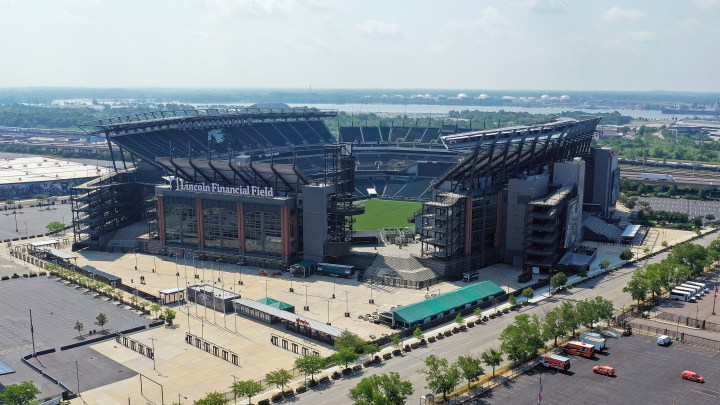 The NFL season kicks off Thursday. The Wall Street Journal reports that NFL revenue could fall as much as $4 billion in 2020, depending on how many fans eventually attend games.

That’s the reality in Los Angeles, where developers built a grand, new stadium with room for 70,000 people to watch the Rams and Chargers play football — but until things change, there will be no fans.

We take a look at how the current fan-less reality could change future stadium projects.

SoFi Stadium in LA cost almost $5 billion in private money, and there were promises of $100 million in tax breaks and reimbursements to lighten the bill. The sell to local authorities was that new stadiums create jobs and increase tourism spending. But with no fans, “unquestionably it’s a tougher sell,” said Andrew Zimbalist, professor of economics at Smith College.

He said many cities and states are in a budget crisis. Tax revenue to pay for local services is down across the nation.

“A situation that was already very difficult financially for cities and states to help out with the construction of new stadiums now is an impossible one,” Zimbalist said.

And he said that will be the case for a while. Which Michael Leeds, professor of economics at Temple University, called a positive development because stadium construction is “very limited economically. There are only a small number of agents who benefit from this.”

Like sports bars and souvenir shops located near stadiums. But for a city’s overall economy, Leeds said, there’s little to gain.