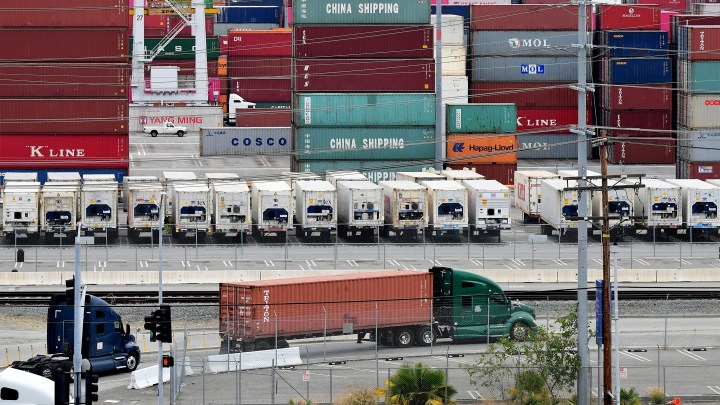 COPY
Container trucks arrive at the Port of Los Angeles. Import transportation companies are doing better than most during COVID-19. Frederic J. Brown/AFP via Getty Images

There are plenty of economic indicators that tell us what’s been happening in the economy, such as housing starts, retail sales, and first-time applications for unemployment.

But to see what’s coming down the pike, the trucking industry can shed light on what consumers will be demanding in the future. And right now, trucking companies are providing an early warning signal about sectors of the economy that are weakening.

There’s a grocery store and wholesaler called Sahadi’s in Brooklyn that imports and sells products from the Mediterranean and the Middle East. Pat Whelan runs logistics for Sahadi’s. Over the last couple months, he said he’s been getting a lot of unsolicited emails from trucking companies.

Whelan said he’s never even heard of these trucking companies. Watching his inbox fill up with these emails, he said, is troubling.

“When you see them constantly looking for cargo, that means they’re not getting their normal cargo,” Whelan said. “So, what did they lose? What’s not shipping?”

One answer? Food supplies to restaurants. Mike Kucharski is the vice president of JKC Trucking, which operates over 200 refrigerated trucks from the Midwest to the West Coast. He said shipping foods to restaurants, hotels, and bars used to make up nearly half of his business.

“We’re about 35% to 45% down,” Kucharski said. “What these truckers are doing is they’re searching to haul anything.”

Kucharski’s company moves products to grocery stores, too. He said there’s been an uptick in that, but it hasn’t made up for the closed restaurants and bars. Now, he’s reaching out to potential customers to see if he can drum up any new business.

“We’re also reaching out saying hey, where are other truckers failing you,” Kucharski said. “We even negotiated some lower rates to help move it along, too.”

When trucking companies are reaching out to find new customers, that may mean they’re worried their old customers might go out of business, said Dale Rogers, a professor of supply chain management at Arizona State University.

“There’s a lot of uncertainty about the companies [truckers are] going to work with over the next several months, and as this thing ends,” Rogers said.

Some transportation companies are seeing a rosier picture.

Villalon said he sees signs that other sectors of the economy are recovering, too. For instance, auto parts are moving, a sign that people will be buying more vehicles.

“You’re seeing a spike in forest products, because housing starts are up,” Villalon said. “Because demand is up.”

But Villalon said the real question is whether that increase in demand is sustainable. 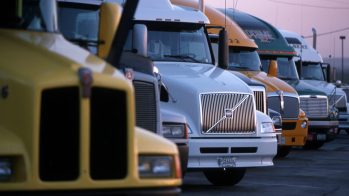 Truckers aren’t too enthused about an AI revolution

From hiring to navigating the road, “everything about trucking is a math problem”