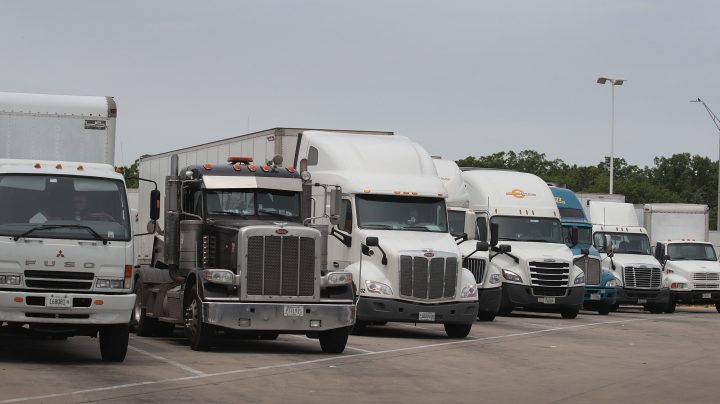 COPY
China's recent lockdowns of ports and manufacturing hubs have slowed imports to the U.S., giving the supply chain a chance to catch up. Scott Olson/Getty Images

China's recent lockdowns of ports and manufacturing hubs have slowed imports to the U.S., giving the supply chain a chance to catch up. Scott Olson/Getty Images
Listen Now

Recently, it’s been looking like congested supply chains have been easing a bit. There’s a big decline in the number of ships waiting to get into the ports of Long Beach and Los Angeles, and according to freight analysts at Cass Information Systems, freight volumes eased a bit in March, which has freed up capacity for the trucks that haul goods around the country.

Ever since China started locking down ports and manufacturing hubs last month, the country hasn’t been shipping as many products to the U.S.

“That has drastically impacted the trucking capacity needs on the West Coast of the United States,” said Weston LaBar, head of strategy at the freight broker Cargomatic. “Because you’re not constantly getting the flow of goods the way you were.”

There are also more trucking companies than there were a year and a half ago, according to Jason Miller, a professor of supply chain management at Michigan State University.

“We’ve had supply essentially starting to catch back up to where we need it to be,” Miller said.

But it depends on what type of trucking we’re talking about.

Miller said capacity is mostly freeing up when it comes to plain-old unrefrigerated trucks that carry things like clothing, furniture and appliances.

But for flatbed trucks that haul big items, like steel coils and heavy equipment, not so much.

Even where capacity is freeing up, trucking prices are still pretty high.

“I’m probably paying double a pallet versus a year and a half ago,” said Pat Whelan, who handles imports for Sahadi’s, a grocery store and wholesaler in Brooklyn. While he’s paying more, he said he doesn’t feel as much friction in the supply chain.

Even though things are improving, Whelan said he’s still keeping a lot of extra product on hand, just in case.