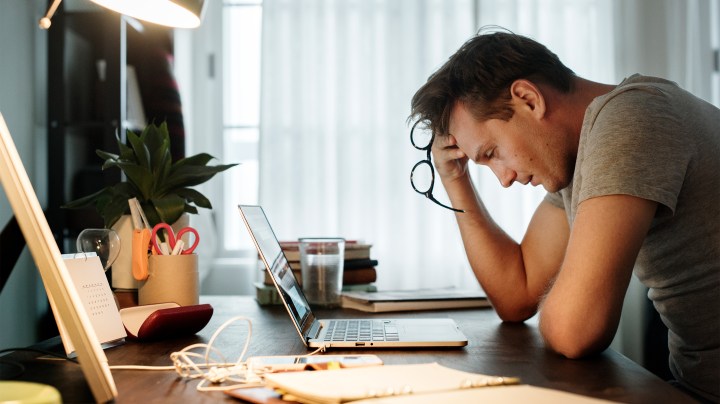 COPY
Workers are taking less time off during the pandemic. Even in normal times, Americans leave up to half their vacation days unused. Rawpixel/Getty Images
COVID-19

Workers are taking less time off during the pandemic. Even in normal times, Americans leave up to half their vacation days unused. Rawpixel/Getty Images
Listen Now

The pandemic has changed so much about how we work, including how much we don’t work.

Surveys have found those working from home are logging longer hours as the boundary between personal and professional life breaks down, and job cuts have left many workers with less security and more responsibilities. Now, with the summer vacation season upon us, workers are taking less paid time off.

For many workers, the idea of burning paid time off right now just doesn’t sit right. A survey by staffing firm Robert Half found more than a third of workers planned to save their vacation for later in the year, and more than a quarter planned to take less time off overall.

“It feels weird taking it without having a real good reason to take it, just to spend it lounging around the house,” said data scientist James Hendricks, who has been cooped up in his Houston home with his family for months.

They’ve already canceled a trip to Disney World later this year, and he doesn’t even feel comfortable taking short day trips out of town.

“Having to stop for gas and having kids in the car that will need to go to the bathroom at some point — I just don’t want to manage all of that,” he said.

Atlanta commercial photographer Kyle Pearce has also been stalling on taking time off. He works in retail, and his wife works for an airline, so job security is a concern, plus he really wants to save his days off to visit his parents in North Carolina — whenever that becomes safe.

“We’re big family people,” he said. “With my parents being in their 80s, normally we would go back there to see them.” But he’s not sure that will happen this year and is worried he’ll lose some of the vacation days he’s accrued.

The specter of employees banking large amounts of paid time off has become a concern for many employers, said Elissa Jessup with the Society for Human Resource Management.

“It could cause an employee to either lose their vacation time that they earned, or if a large group of employees are requesting time off near the end of the year so they don’t lose it, it could also impact business operations as well,” she said

In some cases, companies must pay employees for unused PTO, and there’s the issue of burnout.

“Without proper breaks, our employees just aren’t as productive as they need to be,” said Jill Chapman, senior performance consultant with human resource services firm Insperity.

She said the added stressors of the pandemic make it even more important for workers to take a break.

“There’s probably a lot of us that haven’t really come to grips with what the pandemic has done to us,” she said. “We just keep shoving things back and there’s going to be a point where we’ll maybe hit a wall.”

Managers can model that taking time off is OK by doing it themselves, she said. Some companies, like Microsoft, have given employees extra vacation days while others have switched to unlimited PTO. There’s little risk employees will abuse the policy, Chapman said. Even during normal times, Americans leave up to half their vacation days unused.

Business service firm PwC expanded an existing program, in which it shut down the entire business for the holidays, and added three additional shutdowns during the summer, to encourage employees to recharge.

Nicole Wong, a leadership development manager for the company, was unable to take a planned trip to Hawaii during her break at the end of May, so she recreated the experience in the backyard of her Silicon Valley home.

“We packed our suitcases and took them through the airport of our house in a cardboard box to Hawaii, which was the backyard,” she said. “Then we stayed in our hotel in Hawaii, which was a tent overlooking our one palm tree.”

She planned an entire week of Hawaii-themed activities: making Spam musubi, hula dancing and snorkeling in the hot tub.

“We’re really focusing on making the best with what we have,” she said. “I was trying to come up with new ways to do the things that we loved from before.”