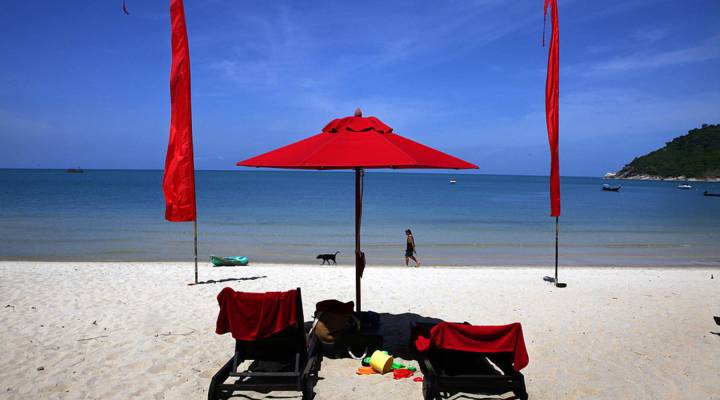 Sara Williams, 30,  has not taken a vacation of one week or longer in more than five years.

She’s among those who participated in the Marketplace-Edison Research poll. She’s a military veteran married to a veteran; they both attended Colorado State University on the G-I bill. They have since settled down in Fort Collins — a cozy college town at the foothills of the Colorado Rockies. They both found jobs after graduating: she is an office administrator, he is a software engineer.

“We’ve never taken a trip just the two of us, anywhere,” said Williams. After their wedding, the couple couldn’t afford a honeymoon; then they bought a house—paying more than they originally budgeted. Next, their car broke down and they had to buy a new one.

“I think in a few years, once we get our student loans paid off and our car paid off, we’ll be able to start putting money towards that,” Williams said.”But there’s really not any extra to take vacation. We wouldn’t really be able to go anywhere.”

According to the Marketplace-Edison Research Poll, though, a lot of Americans in the middle-income bracket are not getting away on vacation very frequently, if at all.  The poll found that 24 percent of households reported not taking a vacation of one week or longer in more than five years.

Taking a regular family vacation is an important mark of middle-class identity in America.

According to a 2015 survey by the Pew Research Center, respondents ranked having the wherewithal to go on vacation third, behind having a secure job and being able to save money, as a requirement for being middle class in America.

“We have 45 percent of people saying, ‘having time and money for vacation’ was important to being in the middle class,” said Kim Parker, director of social trends research at Pew. “It’s right up there with owning a home, and higher than having a college education.” (Eighty-nine percent said having a secure job was important; 86 percent said the capacity to save was important.)

Since at least the 1930s, taking regular out-of-town vacations has been a hallmark of making it into the American middle-class,  said historian Patty Limerick, director of the Center for the American West at the University of Colorado-Boulder. She calls this trend—which held strong from the New Deal in the 1930’s, through the decades after World War II and into the 1970s and ‘80s—“the democratization of recreation.”

A historic mural in the lobby of the Brown Palace Hotel in downtown Denver depicts wealthy high-society tourists arriving by plane to vacation in the Rockies.

“By the mid-20th century, you don’t have to be from an elite corporate family to vacation,” said Limerick. “You can have a dad who’s working at a factory and making quite a significant wage. The gasoline’s affordable and you can car-camp if you need to, and there is a whole proliferation of those kinds of facilities.”

Limerick said that rising wages, and cheap travel options, allowed hourly workers in manufacturing and the trades, and service workers in government and the private sector, to take week-long (or longer) family road-trips or camping vacations. In many parts of the country, these  families could rent a cabin on a lake—in some places even own a cabin—or visit Disneyland, national parks in the Rockies, or a resort in the Catskills.

But Limerick said that nowadays, those kinds of out-of-town vacation opportunities are unaffordable or unavailable to many in the working class.

“So many things confound that, because you can have a father and a mother making minimum wage and they simply can’t, or they have tight constraints on how much time they can take away,” she said.

In fact, the Marketplace-Edison Research Poll found that people who haven’t vacationed in five years or longer are more likely to be paid hourly (68 percent) than on a salary (42 percent). Hourly workers — especially those in low-paid and non-union jobs — are less likely than salaried workers to receive paid vacation and holidays.

Among ethnic groups, blacks and Hispanics are less likely than whites to  have taken a vacation in the last year. And people with a high school diploma or less, are least likely to vacation regularly —approximately four in 10 have not had a vacation in five years or more.

“Being able to have a predictable schedule, to make plans ahead of time and execute them — that’s all part of the luxury of being able to afford and take time out for a vacation,” said Kim Parker of the Pew Research Center. “Time out of your work schedule to take a vacation is perhaps becoming more rare to people who aren’t connected to organizations that provide that type of benefit.”

The poll also found that women are less likely than men to vacation regularly. Parker speculated that this might result from women’s disproportionate care-giving responsibilities for children and elders.

“A lot of working moms take days here and there to attend school events and that sort of thing,” said Parker. “And, that eats away at the week you could have had over the summer.”

Sara Williams at her home in Fort Collins, Colorado.

Sara Williams, who lives with her husband in Colorado, said both of their employers provide paid vacation. But taking time off and then just staying at home “kind of seems like a waste,” although she readily admits that this is stressful.  It’s also a familiar pattern—Williams’ father, a salesman, never made enough to save for leisure.

“My dad worked really, really hard to help support all of us,” she said. “There was only one family vacation that I can remember—we went to this place called Jellystone Park, for at least a couple days. We never wanted for anything, but didn’t have much extra.”

Williams dreams of being able to take a vacation with her husband some day.

“I would love to go to Europe, like Scotland—lush and green and beautiful and there’s so much amazing history there,” she said. “That would be an awesome vacation. But it’s so expensive, even just the airfare, the hotel and the food—yeah.”