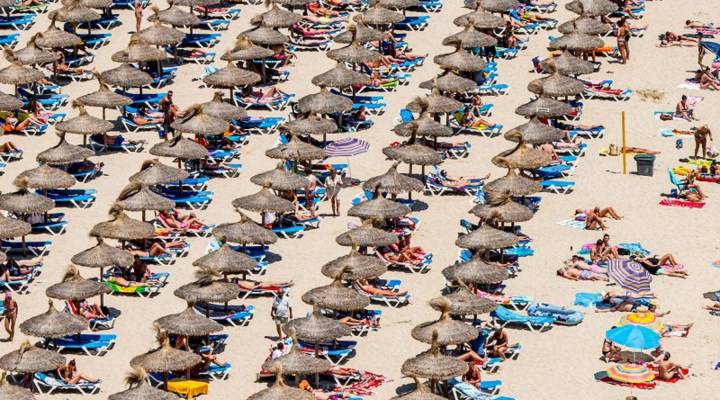 COPY
Fewer than half of U.S. workers use their vacation days, a U.S. Travel Association survey says. Above, tourists sunbathe on the Magaluf beach in Mallorca. David Ramos/Getty Images
Workplace Culture

Fewer than half of U.S. workers use their vacation days, a U.S. Travel Association survey says. Above, tourists sunbathe on the Magaluf beach in Mallorca. David Ramos/Getty Images
Listen Now

More than half of Americans don’t use all of their paid vacation days, according to an annual report from the U.S. Travel Association.

Employees said that worries about work were the biggest factor holding them back from taking time off. Even when they do take time off, many find it hard to disconnect from their responsibilities in the office, continuing to check emails or take calls.

On a recent trip to Hawaii, Jennifer Caukin, a public relations manager from Silicon Valley, found it hard to unplug.

“I have a beautiful view. It’s just magical here. It’s paradise,” she said. She took advantage of her jet lag to rise early and start the day — not with a sunrise walk on the beach or coffee on the lanai, but some alone time with her devices.

“It starts with email, and then it goes on to my instant messaging,” she said. Even in “paradise,” Caukin found it hard to let go.

“There’s always a part of me that has a bit of a toe in the water on work, even when I’m vacationing, just making sure nothing urgent is going on that I need to be responding to,” she said.

Several years ago, Evan Sawdey from Chicago was working for a demanding startup where, he said, the effort to tie up loose ends at the office before vacation was brutal.

“I just remember the week-plus of work I had to go into to make sure that everything was taken care of,” he said. “It was just that level of just sheer panic.”

When Sawdey finally made it to Hawaii, he immediately opened his emails and found some demands from his CEO.

“I just remember sitting there on the plane while everyone else was getting their bags from the overhead and just feeling depressed, just knowing that the vacation hadn’t even started by that point, but I was just like: ‘Oh, goodness! Already with this?'” he said.

Inability to disconnect from work denies people the considerable benefits of vacation, according to Bryan Robinson, psychotherapist and author of the book “#Chill: Turn Off Your Job and Turn On Your Life.”

“That’s what I say: always take a take a vacation, not a guilt trip,” said Robinson, a self-professed “former workaholic” who used to smuggle work documents hidden under the spare tire of his car on family trips. Now he counsels others who find it hard to take vacations.

“They’re afraid that somebody might be vying for their position, or their manager might perceive them as slackers, or not a team player,” he said.

San Jose, California-based software engineer Ron Buencamino has tried to find a happy medium: he finds it easier to take multiple mini trips, extending the weekend by a day or two, here and there, and never traveling more than an hour or two away.

“You’re within distance to be able to tend to your responsibility if you absolutely need to. Or you’re still in the same time zone, where if you have to jump on a phone call or respond to some emails, you’re at least still cognizant of the time everybody’s working,” he said.

A recent survey from travel insurer Allianz Global Assistance found more than half of Americans were taking these so-called “micro-cations” in place of longer trips.

But with technology keeping us hyper-connected at all times, Robinson said these short trips may not be enough.

Earlier this month, Buencamino was preparing for his first actual long trip in years and doing the previously unthinkable: taking a vacation from devices — and his guilt.