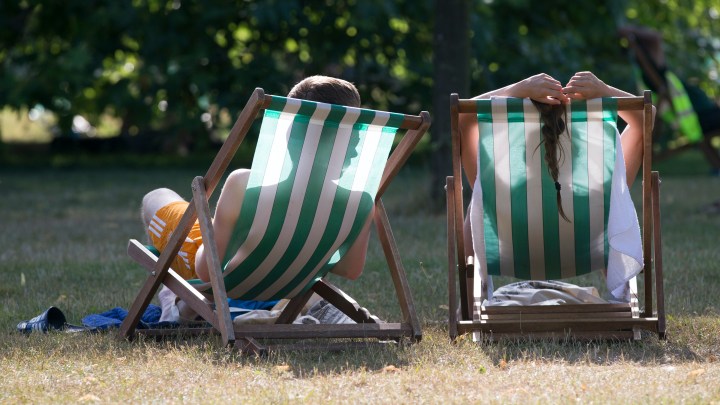 COPY
Employers might receive a wave of employee time off requests in the near future, testing companies' flexibility. Oli Scarff/Getty Images
Workplace Culture

Employers might receive a wave of employee time off requests in the near future, testing companies' flexibility. Oli Scarff/Getty Images
Listen Now

After more than a year of pandemic restrictions, stress and trauma, Americans are ready to go on vacation. In a survey from the U.S. Travel Association, almost two-thirds of Americans said they “desperately” needed one.

U.S. workers, at least those lucky enough to get paid time off, are notoriously bad at taking it, leaving on average half of their vacation days unused. But this year, increasing vaccinations are letting loose a gusher of pent-up travel demand that could bring challenges to workplaces.

As soon as Jennifer Temple, a communications professional in Seattle, had the chance, she started making plans for her post-vaccination life.

“I literally got home from my first dose and I Slacked my boss,” she said, referring to her office messaging service. “I said, ‘I just realized I can travel on May 8, I did the calculation, and I’d really like to go.'”

After she figured out her password to travel sites she hadn’t used in over a year, she booked a trip to Houston in May to see her family, a jaunt to California wine country in June and a trip to eastern Washington to catch a concert she had tickets to in 2020 that has been rescheduled for August.

“And beyond that, I really would like to get out to Hawaii, Belize, warm tropics are on my horizon,” she said. “That’s all I can think about right now.”

The sudden rush to take vacations puts employers in a delicate position, said John Dooney, with the Society for Human Resource Management.

“These requests will come kind of in a short time period,” he said. “So I think that’s the challenge companies may face.”

Employers don’t want workers building up huge amounts of paid time off that the company will be liable for, but they also need to keep their businesses running. He said some employers have set limits on the number of people who can be out at the same time to try to stagger vacations.

Others, he said, may consider shutting down completely for all employees for certain periods, as some do around the winter holidays.

But not all companies can afford to be flexible right now. Some are already short-staffed after downsizing during the pandemic, and other industries are having trouble hiring enough people.

James Hendricks is a data scientist for a solar energy company in Houston. He canceled a family trip to Disney World in Orlando, Florida, last November and hasn’t taken more than a few days off all year. Now he’s got a trip out West on his mind.

“I would like to drive everybody out to see the redwoods and some of the other, more rare and interesting natural ecological things,” he said.

He has more than two weeks of time off banked, but it’s not a good time to take it, partly because one of his colleagues died unexpectedly and the company hasn’t been able to fill the role.

“Now there’s just a lot more that needs to be done,” said Hendricks, “and getting away, even for a three-day weekend — we just don’t have the people on hand to take care of it.”

But giving employees a break could have benefits to productivity in the long run, said Sheila Ryan, chief people officer at Clear Capital in Truckee, California, near Lake Tahoe. She knows many workers are burned out and itching to travel “because I’m one of them,” she said.

She described the current moment as “mud season.” In her mountain town, the snow is starting to melt and the pandemic is easing. It’s a sign of sunny days ahead, but right now it’s still a slog.

“So it’s nice to look forward to something,” Ryan said. “We want people to do that. We want our people to be energized and hopeful.”

And that’s exactly what planning a vacation, or three or four, has done for Jennifer Temple in Seattle, who’s been waiting to visit family for 18 months.