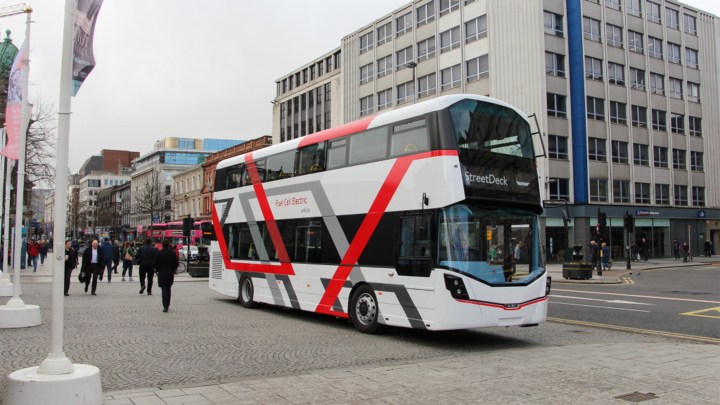 In a workshop in mid-Wales, a hydrogen-powered car — the Riversimple Rasa — clicks and whirs into life. The noise — albeit low level — may be rather irritating to those who love the macho, throaty roar of the unmuffled internal combustion engine. The humming and buzzing of this motor resembles the gentle drone of a hair dryer or a vacuum cleaner.

But a growing band of politicians and business people in Britain will adore this sound for two reasons: first, because hydrogen-powered vehicles don’t emit any carbon, and second, because the don’t depend on an electric battery.

“The rush to battery power was not particularly well thought through,”  said former cabinet minister Iain Duncan Smith. “This turns out to be a bad idea because the biggest producer of batteries is China.”

The People’s Republic commands an estimated 70% share of the global market in electric vehicle batteries, a dominance that Duncan Smith believes the communist dictatorship in Beijing is likely to abuse.

“Look at their aggressive behavior in the South China Sea, in Hong Kong, on the border with India and against the Uighurs. There’s no question in my mind that China poses the greatest threat to freedom and democracy  in the world today,” he said. “It would be madness to increase our level of economic dependence on China.”

Duncan Smith favors hydrogen as an alternative to electric batteries not least because “the U.K. has a global lead in hydrogen technology.”

ITM Power, the world’s top producer of electrolysers —  the devices that extract hydrogen from water — is based in Britain. A British rolling stock company, Porterbrook, has developed the first hydrogen-powered train.  And Wrightbus in Northern Ireland is manufacturing the world’s first hydrogen double-decker bus.

Wrightbus CEO Buta Atwal said the technology is in many ways superior to battery power: a vehicle will travel much farther on a full tank of hydrogen than with a fully charged battery.

“It’s also easier to refuel with hydrogen than to recharge a battery,” Atwal said. “A battery would normally take four hours to recharge. Hydrogen is a maximum 10 minutes to refuel, similar to a diesel operation.”

Wrightbus has sold 35 of its hydrogen double deckers in the United Kingdom and has been getting inquiries from the United States, Australia, India and elsewhere in Asia.

But if hydrogen is ever to challenge the growing dominance of the battery,  it will have to carve out a significant presence in the personal transportation market; it will have to be widely used in cars.

He and his team at Riversimple are developing a snazzy little two-seater hydrogen vehicle called the Rasa (from the Latin “tabula rasa,” meaning clean slate.) Spowers insists it will be financially competitive.

“The cars we’re planning to bring to the market in 2023 will be cost equivalent with a combustion engine car and cheaper than a battery electric car,” he said.

He’s confident that the Rasa will be a commercial success because of the business model that he will employ. Riversimple won’t sell any cars but will instead lease them in an all-inclusive package deal. Customers will pay a monthly fee that will cover the use of the car, maintenance and repair, insurance and fuel according to mileage. Spowers feels certain that the car will be affordable for his customers and profitable for him, because with so few moving parts, the maintenance costs will be minimal and the life of the vehicle lengthy.

But hydrogen cars do face a considerable headwind.

“Infrastructure is the key weakness,” Spowers admitted. There are only 18 hydrogen refuelling outlets in the U.K. compared with more than 8,000 gas stations and 32,000 battery-charging points.

The momentum is with electric. The advantage is with China.

With more than 2.5 million battery-powered cars already plying China’s roads, and with the price of the cars falling rapidly, battery-vehicle technology is unstoppable, said professor David Bailey of the Birmingham Business School. And so, he believes, is China’s domination of it.

“I think the balance of power in the auto industry will very much shift towards China,” Bailey said. “The Chinese government decided that they couldn’t compete in the internal combustion engine market, and that’s why they went electric. They’ve taken control of some of the key parts of the supply chain for lithium batteries. So all roads lead to China ultimately.”

China achieved its lead by massively subsidizing electric vehicles. Whether the U.K. is prepared — or even able — to do the same for hydrogen seems doubtful, especially after the COVID-19 crisis.

Nevertheless, distrust of China is rising fast throughout the free world. Anxiety is growing that the history of the 20th century, in which dictatorships exerted undue pressure on the Western democracies through their control of energy supplies, could repeat itself in the 21st century — this time with China in the driving seat.

“Energy security is going to be a big issue in the future,” Bailey said.