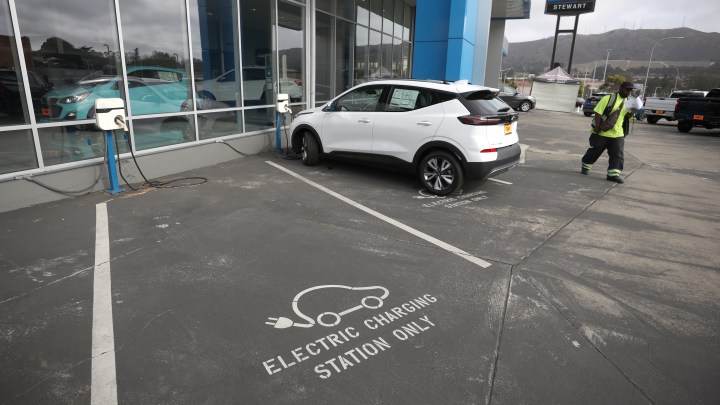 COPY
The price of lithium, used in the batteries of electric vehicles, has increased by more than 40% in the past year. Justin Sullivan/Getty Images

The price of lithium, used in the batteries of electric vehicles, has increased by more than 40% in the past year. Justin Sullivan/Getty Images
Listen Now

Auto manufacturers have been dealing with a lot recently between microchip shortages and changing demand from customers.

Electric carmakers also have to take into account the rising cost of lithium, a metal that’s crucial to the batteries that go into electric cars. The price of lithium has gone up more than 400% in the past year.

To understand why lithium is so useful, how about a short chemistry lesson from Chris Berry, a strategic metals consultant and president of House Mountain Partners: “Lithium is the lightest of all metals, it’s #3 on the periodic table.”

If you can picture the periodic table of elements, it’s right up in the top left corner, under hydrogen. Lithium’s lightness also helps it store a lot of energy; that makes it useful for electronics.

“When you have it in cell phones or electric cars, you want lots of energy with the minimum amount of weight — and lithium is great for that,” said Vibha Kalra, a professor of chemical engineering at Drexel.

So great that the demand for lithium-ion batteries is higher than ever said metal analyst Chris Berry.

“This is probably not the right word to use with batteries, but the price of lithium has exploded in the last year or so,” he said.

As much as $50,000 per ton. Berry said that some battery manufacturers are starting to raise their prices in order to cover that cost — and that’s not going to make electric cars more attractive.

“We’re all sort of focused on this tipping point when an electric vehicle becomes cheaper to purchase and then own and operate than a comparable internal combustion engine car,” Berry said.

Unfortunately, lithium-ion batteries are also at their limit in terms of how much energy they can store, according to Drexel’s Kalra.

“There’s only incremental changes that we can do right now,” she said. “But for true sustainability of electrification of transport, we need next-generation technologies.”

That work is underway, and scientists are developing batteries with other elements. Kristin Persson, who researches new battery materials at Lawrence Berkeley National Laboratory and as a professor at University of California-Berkeley, said there’s promising work with sodium.

“You can definitely make sodium-ion batteries,” she said. “CATL in China has commercialized it.”

CATL is a Chinese company that’s trying to be a pioneer with its sodium battery. But Persson points out that sodium doesn’t store as much energy as lithium does.

That means that you get fewer miles out of a charge or might need a bigger, heavier battery. For now, all of those are a hard sell.