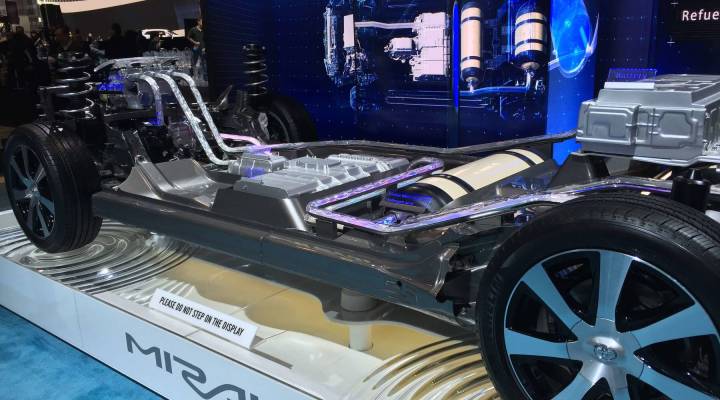 COPY
The interior of the Toyota Mirai, on display at the New York International Auto Show. Stephanie Hughes / Marketplace

The interior of the Toyota Mirai, on display at the New York International Auto Show. Stephanie Hughes / Marketplace
Listen Now

The Toyota Mirai is the world’s first mainstream hydrogen fuel cell car. It’s for sale now in California, and Toyota has plans to make it available in parts of the Northeast later this year.

Toyota says the car is safe, and that testing included firing a bullet into the fuel tank. Still, there are concerns, and in some places drivers aren’t allowed to take the car through tunnels. Another challenge?  Refueling. The car goes 312 miles on a fill, and it doesn’t take long — just a few minutes — but there aren’t that many hydrogen-filling stations in the US.  Yet, at least. The French company Air Liquide announced last week that it will create four hydrogen fueling stations in the northeast — in Connecticut,  Massachusetts and New York.

Toyota’s not the only carmaker in this market — the Hyundai Tuscon SUV and the Honda Clarity are also powered by hydrogen (though not all are available in the U.S. yet).  So, Toyota is hoping that there will be enough infrastructure to support its hydrogen-powered car — and to get people to shell out $57,500 to buy it.

Ben Johnson took a spin in the Mirai at the New York International Auto Show, and he spoke about the car (which means “future” in Japanese) with Ed LaRocque of Toyota.

Click the audio player above for the full report.