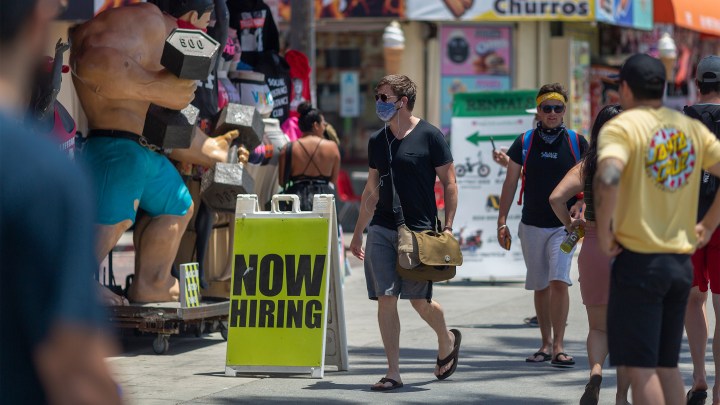 New jobless claims have fallen below 1 million for the first time in 21 weeks.

The Labor Department reported 963,000 first-time claims last week, to be precise. Since mid-March, those claims have ranged from 1.2 to 6.8 million.

Also, the number of people continuing to claim unemployment benefits — on state and federal programs — fell under 30 million.

But this improvement in the jobless data starts from a really bad place of record unemployment during the ongoing pandemic.

If my inbox could talk, my emails this morning would’ve been shouting, “Welcome news” and “Job market improvement.”

Mark Zandi, chief economist at Moody’s Analytics, had a few of those words.

“That’s a long way from anything anyone would consider a ‘good’ economy,” Zandi continued.

New jobless claims are still 50% higher than in the worst week of the Great Recession.

“This is off-the-charts bad,” Zandi said. “We’re digging out, but we have a long way before we get out. And we don’t know how long many of these unemployed folks will remain unemployed and not get back to work.”

Keep in mind, people usually stay on unemployment until their old job calls them back or they get a new job.

Dave Gilbertson tracks this at workforce-management firm Kronos, which is a Marketplace underwriter.

“We’re still seeing this phase of furloughed employees being called back in to work,” Gilbertson said. “We’re not seeing an indicator yet that net new employees are being hired.”

Jessica Oyanagi, a freelance photographer in Hawaii, has been on unemployment since March.

“We kind of burned through our savings because we don’t have a lot,” she said.

That extra $600 “is kind of what has made the big difference for our family just being able to keep up with rent and essentials and bills and things like that,” Oyanagi said.

Now, the family will be scrambling to make ends meet — with her $263 a week in Hawaii unemployment benefits (previously $863 a week) plus her husband’s pay as an essential worker.

A recent study published by the National Bureau of Economic Research used granular data on transactions, income and unemployment claims from the state of Illinois to estimate the impact of withdrawing the weekly federal pandemic supplement from state unemployment benefits — as happened in late July, when Congress failed to extend the FPUC program.

“A reduction from $600 [per week] to $0 would lead to about a 44% decline in local spending,” said report co-author Julia Lane, an economist at New York University and the Coleridge Initiative. Reducing the federal supplement to $400 a week would reduce consumer spending by 12%; a $200-a-week federal supplement would reduce spending by 28%. Lane said the findings from Illinois can be extrapolated nationwide.