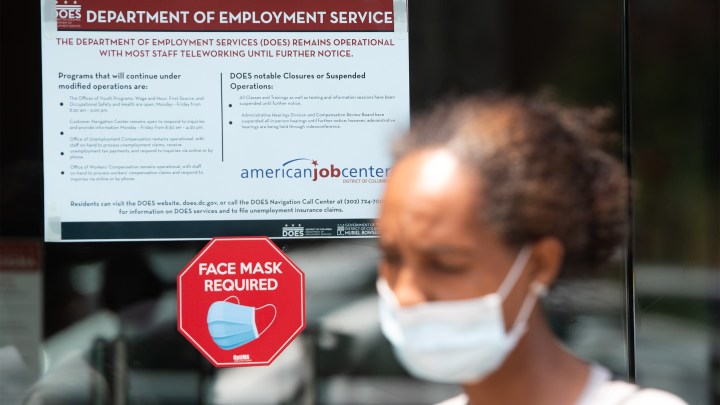 COPY
A woman leaves the Department of Employment Services in Washington, D.C. Estimates of unemployment vary depending on the formula and data used. Saul Loeb/AFP via Getty Images
COVID & Unemployment

A woman leaves the Department of Employment Services in Washington, D.C. Estimates of unemployment vary depending on the formula and data used. Saul Loeb/AFP via Getty Images
Listen Now

The Labor Department will release its employment report for July on Friday. The June report showed that nearly 18 million Americans were out of work.

They join the roughly 30 million Americans who are already claiming unemployment benefits. How many unemployed Americans are there right now?

Let’s start with those unemployment claims.

Economists like this number because it’s up to date and reflects the actual number of claims states processed last week, said Joe Brusuelas, chief economist at RSM consulting.

“All of the people who were receiving some form of unemployment benefits — and that’s north of 31 million people,” he said.

That includes those on regular state jobless benefits, plus freelancers, gig workers and people unemployed because of COVID-19 who are getting federal pandemic benefits.

On the other hand, the Labor Department’s monthly jobs report for June pegged the number of unemployed Americans at just under 18 million.

But that’s likely lowball right now, said Elise Gould, senior economist at the Economic Policy Institute. To be counted as “unemployed,” you have to be actively looking for work.

But in COVID times, “there are many people that are not actually looking because they’re taking the advice of health experts in this country,” Gould said. “Maybe they’re caring for children right now, whose schools are closed.”

“What I’ve been doing is adding up all the people whose jobs have been disrupted — the bulk of them are probably pandemic- or recession-related,” she said.

Including those waiting to be called back from furlough, and part-timers who want full-time work — she comes up with 25 million.

Back in February, before the pandemic hit, 158 million Americans had jobs. So about one in six of them don’t, now.