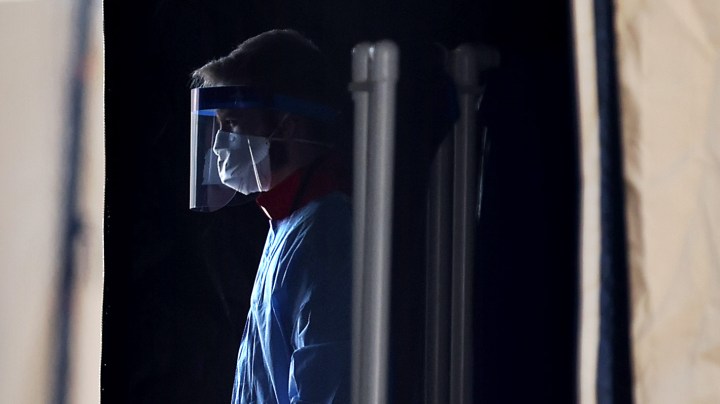 COPY
In the middle of the COVID-19 pandemic, reduced revenue to health care providers made up 29% of the historic second-quarter GDP decline. Chip Somodevilla/Getty Images
COVID-19

In the middle of the COVID-19 pandemic, reduced revenue to health care providers made up 29% of the historic second-quarter GDP decline. Chip Somodevilla/Getty Images
Listen Now

About 5.4 million Americans lost their employer-sponsored health plans, and did not or could not get alternate health insurance. That’s a risk in and of itself, but it may result in job loss in the health care industry.

That’s the warning from the nonpartisan nonprofit Families USA, which is out with new research Tuesday. Stan Dorn, a senior fellow at Families USA, is the author of the report. He spoke with Marketplace’s Sabri Ben-Achour, and the following is an edited transcript of their conversation.

Sabri Ben-Achour: U.S. GDP declined 9.5% in three months and one would have thought perhaps the bulk of that was in restaurants or transportation. But, according to research, it was actually health care.

Stan Dorn: Yes, we were surprised to find that 29% of the entire staggering drop in GDP, the second quarter was due to reduced revenue for health care providers. By contrast, in the entire restaurant industry — food services, accommodations, hotels industry — 17% of GDP drop was [caused by] that sector. There was no other engine driving the downturn as much as health care.

Ben-Achour: Which is kind of surprising, because we hear about the surges in the need for emergency care as coronavirus peaks in different parts of the country. But that’s not what we’re talking about, is it? Who are the folks who are losing their jobs here?

Ben-Achour: What you’re describing is what the health care industry is suffering from just the shutdown. What are you predicting will happen because people have lost their health insurance coverage?

Dorn: What we’ve seen so far is just the the prelude to what we’re afraid may happen soon. In the past, less revenue for health care providers has translated into a staggering drop in GDP. What we found is that health insurance losses projected to result from even an economy that remains stable at many levels will cost another 1.5 million to 2.5 million jobs. As hospitals, doctors offices, clinics lose money, they have to lay off staff, and that hurts the surrounding local economies as well.

Ben-Achour: But, I mean, couldn’t people who lose their job-sponsored health insurance get Medicaid or something under the Affordable Care Act?

Dorn: Sure, and many will. But not all will. Lots of folks who qualify for help won’t sign up. That’s happened before, we know it’s going to happen again. There are two changes. One, fewer patients will have insurance of any kind, and, two, patients who do have insurance will have it in a form that pays less to health care providers. Medicaid, for example, pays a lot less than private health insurance.