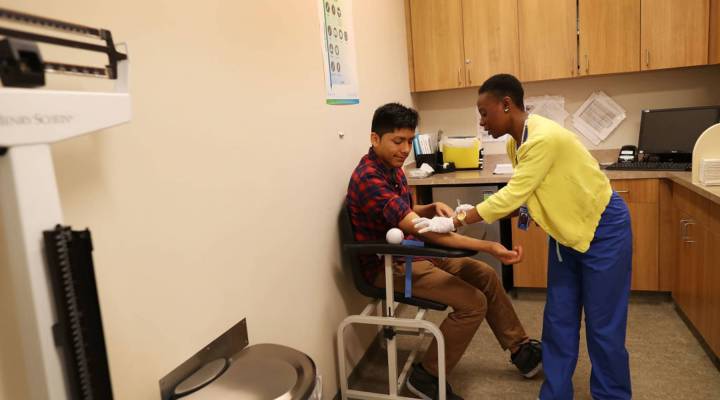 COPY
Peter Yanez, who is insured under a policy from the Affordable Care Act, has blood drawn by Linda Williams, a medical assistant, at a Planned Parenthood health center in Miami, Florida. Joe Raedle/Getty Images

Peter Yanez, who is insured under a policy from the Affordable Care Act, has blood drawn by Linda Williams, a medical assistant, at a Planned Parenthood health center in Miami, Florida. Joe Raedle/Getty Images
Listen Now

The Senate’s version of the Republican health care bill calls for big cuts to Medicaid and would release Americans from the requirement to get health insurance.

Its overall vision is a fiscally conservative one, whose aim is to have consumer behavior pressure companies into delivering the best services possible. But will that pan out?

Marketplace’s senior health care reporter Dan Gorenstein joined us to talk about how much money the bill could save, whose hands that money will end up in, and how the measure could affect a patient’s willingness to seek out services. Below is an edited transcript.

Sabri Ben-Achour: Dan, give us this bill by the numbers.

Dan Gorenstein: There are a couple of ways that this is going to save some money. Number one: The Senate bill would actually cut Medicaid more than the House plan. I’ve seen estimates as high as a trillion dollars over the next 10 years. Apart from phasing out Medicaid expansion, the real change is that the federal funding for Medicaid is open-ended today. Under this plan, it would cap the federal government’s share of how much it pays. Number two: The plan also offers less generous tax subsidies. The more than 10 million Americans who are under Obamacare right now get financial help to buy insurance — they’ll get less help, and it’s going to be skimpier coverage.

Ben-Achour: And fewer people covered. Where does all of that money go?

Gorenstein: Well, much of it’s going to be returned to the wealthiest Americans and in the form of tax cuts. The Center on Budget and Policy Priorities ran numbers and they found households with incomes above $1 million would get annual tax cuts averaging about $50,000.

Ben-Achour: And you said to me before, Dan, that this lays out a conservative philosophy of health care. What do you mean by that?

Gorenstein: Right. Well, it’s the idea that if the government’s going to be in the business of offering health insurance, then it’s going to be really less generous. I mean, you can think of this as high-deductible plans or catastrophic plans that are going to force consumers to be smarter. What’s interesting is that rather than taking on the hospitals or drug companies, this law is going to force consumers to behave differently. And Republicans hope that sends industry market signals to deliver higher value care and services.

Ben-Achour: Will consumers actually behave differently? Is that good for consumers?

Gorenstein: Well, what we know is that people, when they’re in this situation, spend less money. They do cut back — studies show as high as 15 percent. But the thing is that they cut back on stuff that they don’t need, which is good, but they also cut back on stuff that they do need. Think of someone with heart disease deciding not to go to the cardiologist. So in the short run, people are probably going to spend less if this does become law. But there’s good reason to think it’s probably bad for their long-term health, and this could also increase spending down the line.