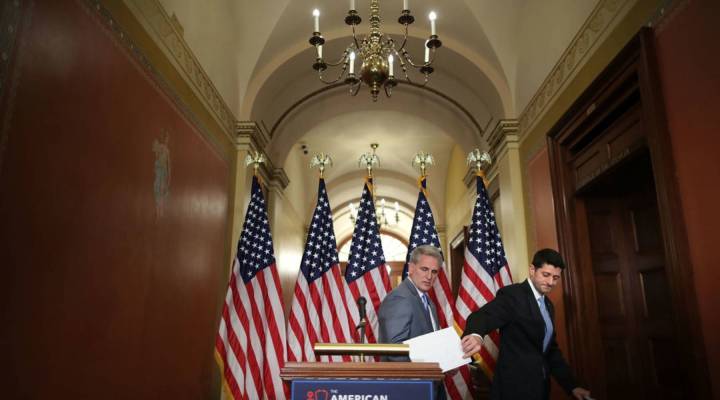 There’s been much discussion about the Congressional Budget Office score on the Republican’s health plan which was released yesterday: 24 million people may lose insurance over the next decade, nearly $900 billion less will be spent on Medicaid and $337 billion knocked off from the national deficit.

But here’s another way to think of this legislation that’s designed to re-engineer almost 20 percent of the American economy. Not as a healthcare bill, but as the first step in the GOP’s plans for tax reform.

So, Congress raised taxes on industry groups like insurers, drug makers, medical device manufacturers and Americans earning $200,000 and up. And this is what the country got for all that money said Gordon Mermin, with the Urban Brookings Tax Policy Center: “The big improvement in the Affordable Care was extending health care coverage to millions of people.”

But now, the GOP’s plan would rollback $600 billion in taxes 10 years. The benefits would go mostly to the wealthiest Americans. Many Republicans believe that tax cuts are the best way to boost economic growth because that money fuels investment and creates jobs.

Doug Holtz-Eakin, who ran the CBO under George W. Bush, said, “There is no public policy — Affordable Care Act, American Health Care Act, that can compare with an economy that grows faster. Tax reform is one way to get there.”

Harvard economist Kate Baicker said yes, Obamacare worked at a price, and that’s a tradeoff we all must now consider.

“When you take money from higher income, healthier people and give it to lower-income poorer people, the main benefit is that those low-income poor people get more health care,” said Baicker. “And it comes with the cost of a little bit slower economic growth.”

Baicker said under the GOP repeal plan, the size of the economic pie would probably be a bit bigger. The tough question is whether that’s worth the cost of millions losing their insurance.