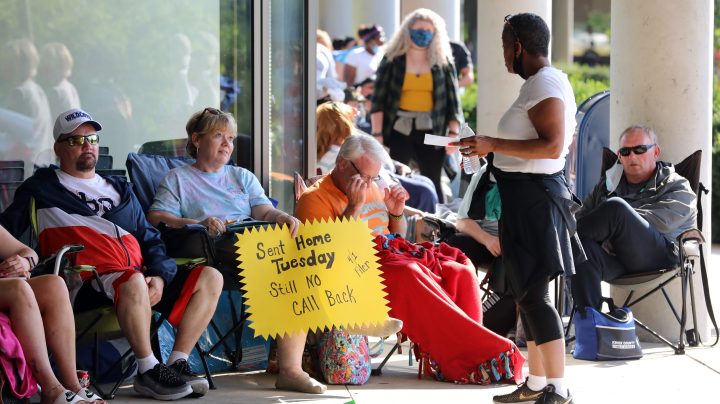 COPY
For every 10 people who successfully filed for unemployment benefits, an April study found that three or four were unable to get through, and two didn’t even try because it was too difficult. John Sommers II/Getty Images
COVID & Unemployment

For every 10 people who successfully filed for unemployment benefits, an April study found that three or four were unable to get through, and two didn’t even try because it was too difficult. John Sommers II/Getty Images
Listen Now

Every time Harry Mazurkiewicz tried calling the unemployment office in Wisconsin this spring, the phone would just ring and ring and ring. After awhile, he gave up and stopped calling.

“I just got tired of being on that phone listening to that stupid music and going nowhere,” said Mazurkiewicz, 61, a house painter in Milwaukee. “Nobody ever answers.”

In Pennsylvania, the same thing happened to Kevin Askew, 57, after he lost his job as a chef at Carnegie Mellon University in Pittsburgh. He tried calling the unemployment office, but never got through to anyone, and he didn’t have access to a computer to try filing online. Eventually, he gave up, too.

“A lot of people, as far as I know, they’re going through the same thing,” he said.

More than 50 million people have filed for unemployment in the four months since the pandemic began, and more than 30 million are currently receiving benefits, but you don’t have to look far to find stories of people who, for one reason or another, have not filed for benefits even though they’re eligible. Many, like Askew and Mazurkiewicz, are struggling to pay rent and afford groceries without benefits.

“There’s a lot of people who just really, really, really struggled to even get through the system, get anyone to talk to them,” said Heidi Shierholz, a senior economist and director of policy at the Economic Policy Institute. “When you have that experience over and over and over again, I actually can see why somebody would just say forget it, and give up.”

It is hard to know how many people who are eligible for unemployment have given up, or never tried to apply, but a survey EPI did in April found that for every 10 people who successfully filed for unemployment benefits, three or four were unable to get through, and two didn’t bother to try because it was too difficult. That was in the early days of the pandemic, when weekly unemployment claims first skyrocketed into the millions; state unemployment offices were unequipped to deal with the volume of calls and online applications.

“There were a lot of people falling through the cracks at that point,” Shierholz said. “These programs are still really, really strapped, but I think they have been able to work through some of the backlog, so I doubt it’s as significant now as it was then. But what we know is it’s still a big problem.”

There are also people who don’t even try to file because they think they’re not eligible. That has been true for years — a 2009 study in the Monthly Labor Review found that more than half of those who are unemployed don’t file for benefits because they think they won’t qualify — but it has become an even bigger issue in the pandemic.

“There’s just so much confusion,” said Annelies Goger, a Rubenstein fellow in the Brookings Metropolitan Policy Program. “I think a lot of people that work part time, or who work, for example, as tipped workers, they might just assume that they’re not going to qualify. But because the CARES Act changed a lot of that, they probably would. So I think people just don’t quite understand who is and isn’t eligible.”

Beyond that, there are people who don’t want the hassle of applying, who don’t know how to apply, who feel there’s a stigma attached to being on unemployment, or who don’t think it’s worth it because they expect to be working again soon.

For Maria Guardado, a server at Founding Farmers restaurant in Potomac, Maryland, it was a mix of reasons.

“It just took so long to prove everything and I was like, I don’t know, I don’t have time for this,” she said. “I have four kids. They take my whole time, and I was trying to just focus on them, doing schoolwork with them, because my husband was working from home, so trying to keep them away from him.”

Like millions of Americans who lost jobs in March and April, Guardado also expected to get called back to her old job back soon enough — and she did, after just a few weeks. But she’s making less now than she used to, and she and her husband had to dip into savings to get through those weeks she wasn’t working.

“There’s a whole variety of reasons that people don’t apply for unemployment,” said Chris O’Leary, a senior economist at the W.E. Upjohn Institute for Employment Research. “The federal government’s been interested in this for years.”

The percentage of unemployed people who are receiving unemployment benefits has actually risen during the pandemic, largely because the CARES Act expanded eligibility. In recent years, before the pandemic, about a third of those who were unemployed would be on unemployment at any given time, “but right now, it looks more like 50% to 60%, in some weeks, even 70% of all the unemployed are getting benefits,” O’Leary said.

Still, for some of those who are not, the consequences are dire. Mazurkiewicz hasn’t been able to pay his rent, and is worried about eviction. Askew is only able to afford groceries because he’s getting SNAP benefits. People in that position can and should put in an application now, O’Leary said — it’s not too late.

“I think people should not give up, because the payments can be retroactive,” he said. “People are entitled to compensation. They’ve earned it, they’re entitled to it if they’re involuntarily unemployed, and it can amount to a significant amount of money.”

Especially with the extra $600 a week from the federal government, for people who were unemployed between March and the end of July, “it’s real money and it could help people survive this crisis, pay their bills, pay their rent, get what they need, and give them some sense of security until things improve.”

On top of that, it’s good for the economy if people are getting — and spending — those unemployment checks, Shierholz said.

“It’s good for the macro economy if people who have seen job loss in this recession actually get those benefits, because if they have to cut their spending, that hurts all of us. That means the people who provide the goods and services they will no longer be buying because they don’t have those benefits will actually lose their jobs, and on and on and on. So those benefits are really important to the broader economy.”