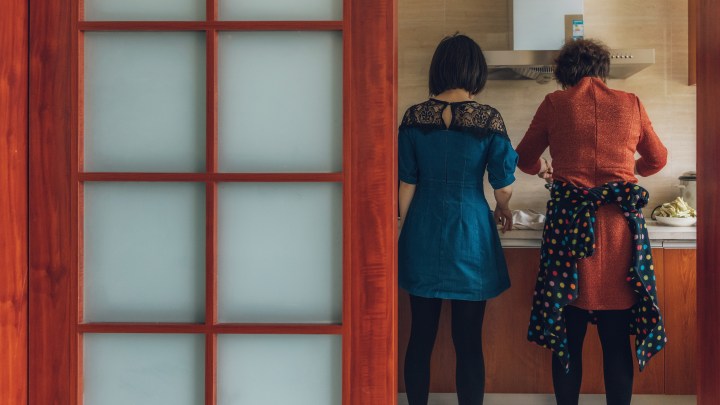 COPY
As people are stuck in tiny apartments in locked-down cities, Mom and Dad's suburban house seems like a good option. Golero via Getty Images
COVID-19

As people are stuck in tiny apartments in locked-down cities, Mom and Dad's suburban house seems like a good option. Golero via Getty Images
Listen Now

Americans are struggling to pay rent, and as the financial crisis deepens, many are moving back in with their parents.

Unlike other cultures, there’s always been a stigma in the United States around living with your family after a certain age. But with a flailing economy, that might be shifting.

Two months ago, Eden Cayen made a difficult decision: She, her husband and their 1-year-old son moved in with her mom in upstate New York.

For Cayen, who is 39, the decision came after what felt like an endless lockdown in a very small Brooklyn apartment.

“I couldn’t imagine spending the summer in the city with my son,” she said. And she and her husband couldn’t afford a bigger place in the city.

“The number of adults living with their parents jumped by about 10% this spring, starting in April,” said Jeff Tucker, an economist with Zillow, which published a report about adults moving back in with their parents. “That’s almost about 3 million people.”

The trend of adults living with parents and grandparents is growing because of the pandemic, but it is not new. Between 2000 and 2017, the number of 25- to 34-year-olds living with their parents nearly doubled.

“It’s kind of got the stigma of failure in a way, you know?” said Eden Cayan in upstate New York. “Because you have to go back under their roof. I guess that’s how I see it.”

“It’s a pretty strong belief in the U.S. that to become an adult you have to stand on your own two feet,” said Amy Schalet, professor of sociology at the University of Massachusetts Amherst. “You know, the idea of the rugged individual.”

Schalet said as our economy changes, so will the meaning of “growing up.”