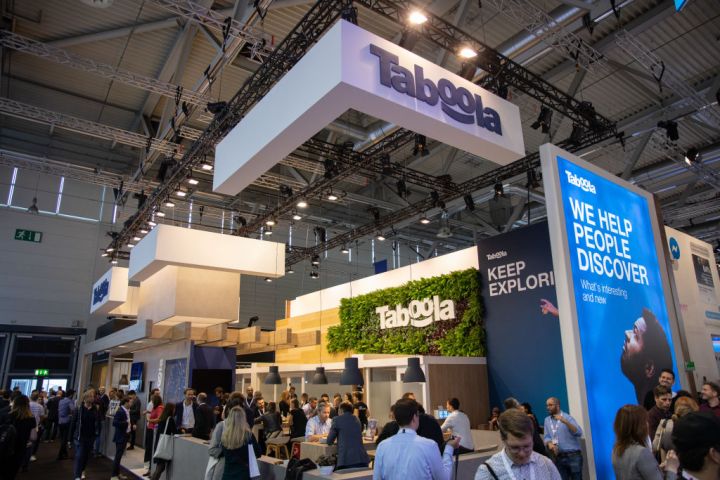 COPY
The Taboola booth at a digital marketing exposition in Germany. The company plans to join forces with Outbrain. Joshua Sammer/Getty Images for Taboola

The Taboola booth at a digital marketing exposition in Germany. The company plans to join forces with Outbrain. Joshua Sammer/Getty Images for Taboola
Listen Now

Antitrust officials at the Justice Department are not going to block the proposed merger between internet companies Outbrain and Taboola, according to multiple reports. Those companies are responsible for a lot of those ads at the bottom of websites, the ones mixed in with straight news articles. You might call them clickbait.

“The publication where the ad is appearing makes some money by selling that ad space. The company that wants their link visited, that site also displays ads,” said Joshua Braun at the University of Massachusetts, Amherst.

Taboola and Outbrain deal in different kinds of sponsored content. One version is designed to polish a brand, push people to a site trying to garner more users. The other is just about clicks, with articles like “Read this before you buy that hot air fryer.”

“They just want any visitors, any traffic that they can bring back to their site,” Braun said.

This merger likely won’t change much for users, said Kunal Gupta, CEO of ad-tech company Polar, which provides services to Outbrain. This deal is about competing against the giants that dominate the internet ad space.

“The scale is still small relative to what’s actually happening on the internet in the face of Google and Facebook,” Gupta said.

While users aren’t likely to notice much difference, websites that display the ads could end up earning less.

“If you’re a publisher, you are probably better off considering two different offers rather than one,” said Brian Wieser, president of business intelligence at the media services company GroupM.

The merger still faces a regulatory hurdle in Europe.