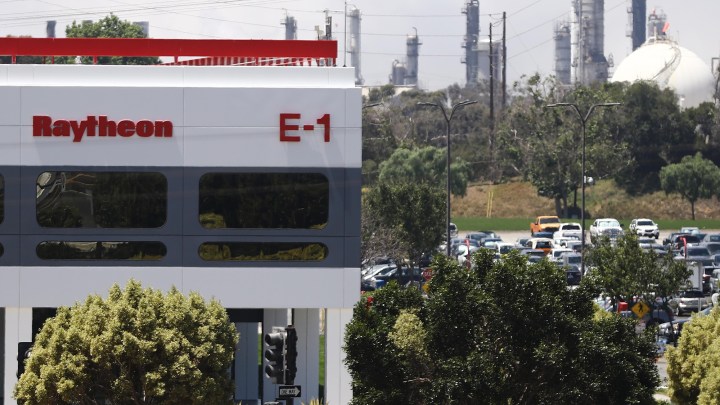 COPY
A company sign is posted at a Raytheon Co. campus on June 10, 2019 in El Segundo, California. Mario Tama/Getty Images

Over the weekend, defense contractor Raytheon and aerospace company United Technologies announced that they plan to merge.

They’re calling it a “merger of equals,” an all-stock deal that would result in a new company, Raytheon Technologies.

If the deal makes it past regulators, the $100 billion company would become the second-largest aerospace and defense company in the U.S., behind Boeing.

The companies say the proposed merger’s important for them to keep their balance in shifting markets.

“They’re looking at it, in this acquisition, truly as a long-term view that this combined company will be able to ride the ups and downs of the markets,” said Doug Gates, head of aerospace and defense for KPMG.

Raytheon has a big defense contracting business. United Technologies is big in commercial aviation. “If commercial is slowing down, they’ve got large military might, and vice versa,” Gates said.

Another reason behind the merger: the idea that bigger is better.

“The merger would create a company that would rival Boeing and Lockheed [Martin] as largest defense contractor, continuing a trend of consolidation that’s been ongoing since the 1990s,” said Rhys McCormick, a fellow at the Center for Strategic and International Studies.

That consolidation worries President Trump. He expressed concern this morning that too much consolidation in the defense industry may raise prices for the U.S. military — and, by extension, taxpayers.

But the merger is unlikely to face a lot of pushback from federal regulators, said John “Jerry” McGinn, executive director of the Center for Government Contracting at George Mason University.

“Because there’s not a tremendous amount of overlap between these two companies in terms of the markets they operate in,” McGinn said.

Government regulators do have to approve the deal — among them, the combined company’s biggest customer, the U.S. Department of Defense.