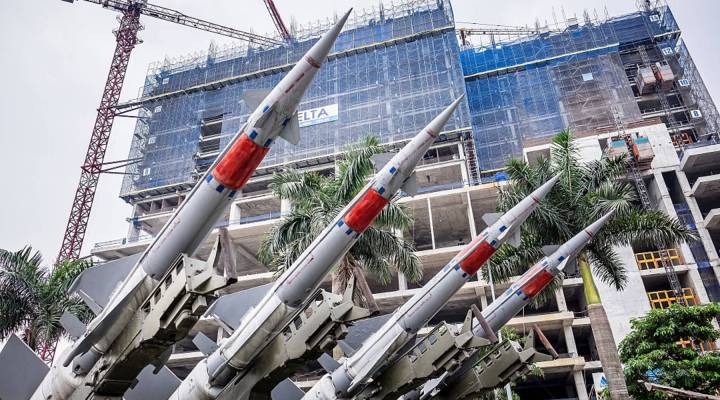 Models of missiles at the Vietnam People's Air Force Museum on May 23 in Hanoi, Vietnam. U.S. President Barack Obama announced the U.S. is fully lifting its embargo on sales of lethal weapons to Vietnam. Linh Pham/Getty Images

Models of missiles at the Vietnam People's Air Force Museum on May 23 in Hanoi, Vietnam. U.S. President Barack Obama announced the U.S. is fully lifting its embargo on sales of lethal weapons to Vietnam. Linh Pham/Getty Images

U.S. officials are framing the end of the embargo as a way to help Vietnam defend itself from China. The two neighboring countries are in conflict over claims of waters off Vietnam’s coast in the South China Sea. There may also be other political factors at play, including potential U.S. access to a deepwater port in Vietnam.

Politics aside, lifting the lethal weapons embargo in Vietnam doesn’t necessarily mean a huge boon for the U.S. weapons manufacturing business, according to the New York Times. The Vietnamese defense budget is an estimated $4.6 billion this year and only $1 billion is earmarked for buying weapons. This figure may reach $1.6 billion a year by 2025.

America’s weapons manufacturing industry already brings in some big bucks. In fact, the U.S. is home to the biggest arms manufacturers in the world. Here are just a few of the numbers from the lucrative business:

• The sales of arms from the U.S. to foreign countries reached $36.2 billion in 2014, according to a study prepared for congress late last year. This was up a staggering $10 billion from 2013, thanks to multibillion-dollar deals with Qatar, Saudi Arabia and South Korea.

• South Korea, facing continued tensions with North Korea, also spent the most on weapons overall in 2014, according to the study. The country had $7.8 billion in contracts worldwide. Most of this was spent on U.S. arms, including transport helicopters and surveillance drones. The next biggest purchasers were Iraq and Brazil.

• The world’s largest suppliers of arms are American companies, according to the Stockholm International Peace Research Institute (the organization did not include China’s weapons manufacturing in its findings due to transparency issues with the country’s data). At No. 1 is Lockheed Martin, followed by Boeing. While the UK’s BAE Systems is the third biggest, Raytheon, Northrop Grumman and General Dynamics take the remaining fourth, fifth and sixth top spots. In 2014, these companies controlled about half of the arms market.

• Lockheed Martin’s sales alone were huge. The company’s international and domestic arms sales reached nearly $37.5 billion in 2014, according to SIPRI. Most of its business, 82 percent, is in arms sales. Lockheed makes a range of weapons, from fighter planes to vehicles that launch rockets, and is currently developing hypersonic aircrafts and missiles.