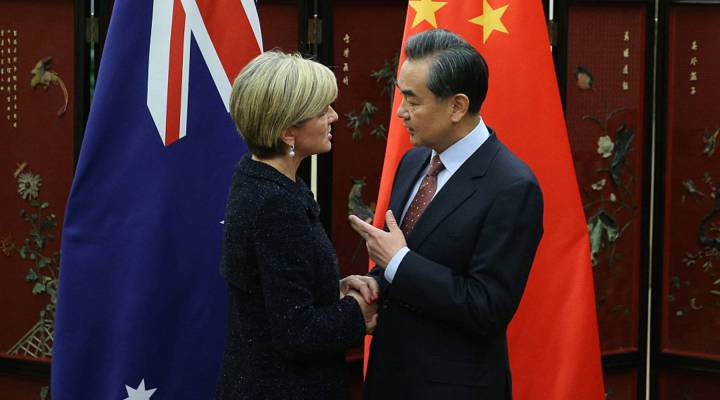 COPY
Australian Foreign Minister Julie Bishop (L) shakes hands with Chinese Foreign Minister Wang Yi as she arrives for a meeting at the Ministry of Foreign Affairs on February 17, 2016 in Beijing, China. Bishop is visiting China to discuss the concerns surrounding the militarization of islands in the South-China Sea. Wu Hong-Pool/Getty Image

Australian Foreign Minister Julie Bishop (L) shakes hands with Chinese Foreign Minister Wang Yi as she arrives for a meeting at the Ministry of Foreign Affairs on February 17, 2016 in Beijing, China. Bishop is visiting China to discuss the concerns surrounding the militarization of islands in the South-China Sea. Wu Hong-Pool/Getty Image
Listen Now

There are hundreds of disputed islands in the South China Sea, and on one of them – Woody Island, one of the Paracels – China has apparently placed surface to air missiles. China has controlled this particular island for about 60 years and says the missiles have been there for a long time; that is disputed by the US and other sources. Japan said the move was unacceptable, Vietnam called it a threat to peace.

China, Taiwan, Vietnam, Malaysia, the Philippines and Brunei all lay conflicting claims to various sets of islands in the South China Sea, and taken as a whole the disputes have three main stakes: economic, legal and military.

Economically, there are hydrocarbons and fisheries on the table. Run-ins between the Chinese coast guard, which attempts to impose a seasonal fishing ban on the over-fished sea, and Vietnamese fishing boats often end violently.

“Ships being sunk when they were rammed by Chinese vessels, in at least one case a Chinese coastguard ship lit a Vietnamese fishing boat on fire with flares,” said Gregory Poling, Director of the Asia Maritime Transparency Initiative at the Center for Strategic and International Studies.

There are also an estimated 900 trillion cubic feet of natural gas and seven billion barrels of oil in the South China Sea, and flare ups over the location of Chinese oil rigs have resulted in riots in Vietnam.

But ultimately, the dispute is not about money.

“The economic explanations are not very convincing,” said Sarah Oliver, a research analyst at the Peterson Institute for International Economics. “Most of the major oil reserves are in places that aren’t actually disputed territory.”

The fishing? “The fishery is not, in the great scheme of things, all that valuable,” said James Kraska, a professor at the U.S. Naval War College. The disputes are about military and strategic dominance for China.

“This is about strategic posture,” said Kraska. “They would like to have a free hand in Asia generally.” Kraska says it was scarcely more than a decade ago that China proposed splitting the Pacific into spheres of influence.

For the United State, it’s also about international laws and preventing China from rewriting them. “Chinese claims are excessive, and the UN Convention on the Law of the Sea and the system of maritime law underlying it would not survive an acceptance of Chinese claims,” said CSIS’ Poling.