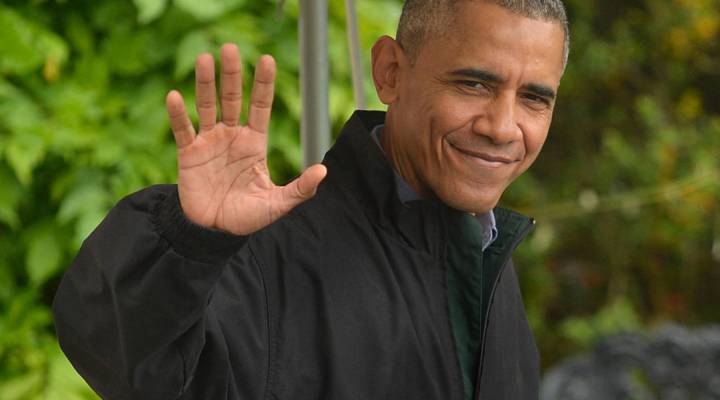 COPY
U.S.President Barack Obama waves to the press on Saturday before leaving for his week-long trip to Japan and Vietnam. While in Hanoi, Vietnam, Obama announced a series of business deals between American companies and Vietnamese businesses and entities. Mike Theiler-Pool/Getty Images

U.S.President Barack Obama waves to the press on Saturday before leaving for his week-long trip to Japan and Vietnam. While in Hanoi, Vietnam, Obama announced a series of business deals between American companies and Vietnamese businesses and entities. Mike Theiler-Pool/Getty Images
Listen Now

Boeing has made a deal to sell aircraft to VietJet.  GE Wind will partner with the Vietnamese government to develop windpower.  Pratt & Whitney will sell advanced engines to Vietnam.

All these deals are announced just as President Obama is in Hanoi to put an end to a decades long arms embargo and highlight improving ties with the former adversary.

“No, it’s not purely coincidental,” said Robert Shapiro, chairman of economic advisory firm Sonecon and a former Undersecretary of Commerce.  “But, these deals are not made simply for the occasion of the summit,” either, he added.

A lot of American companies, at any given time, are pursuing deals all over the world, often with the help of the U.S. government.  Companies need help navigating a foreign government’s bureaucracy, or maybe they’re trying to sell to a foreign government. When dealing with economies that are heavily managed by governments, it helps to go through one’s own government.

At a minimum, if a company is pursuing a deal abroad it is usually in touch with the U.S. embassy there.  While an embassy can’t support one U.S. company over another, U.S. embassies will advocate for American firms over other firms.  They can also help an American firm whose deals abroad require licenses or permits back home in the U.S.

“The president then decides he’s going to visit Vietnam,” Shapiro said. “What deals are in the works right now that we can announce while the president’s there?”

Often, presidential visits can speed things up, according to Miriam Sapiro, principal at Summit Strategies International and a former U.S. trade representative.

“When there is a presidential visit it can provide an impetus to help move a deal along more quickly,” she said.  After all, it’s nice publicity when companies can get their deal done in time to be announced by a U.S. president.

Foreign governments have an interest in having deals to announce as well.

“There are even times when a foreign government will urge its own companies and officials to facilitate deals,” said Wendy Cutler, vice president of the Asia Society Policy Institute.

U.S. presidents are no different in their desire to promote commercial successes as, “these deals generally have to do with exports from the United States, tied and supported by good paying American jobs,” said Cutler.

What president doesn’t love that?