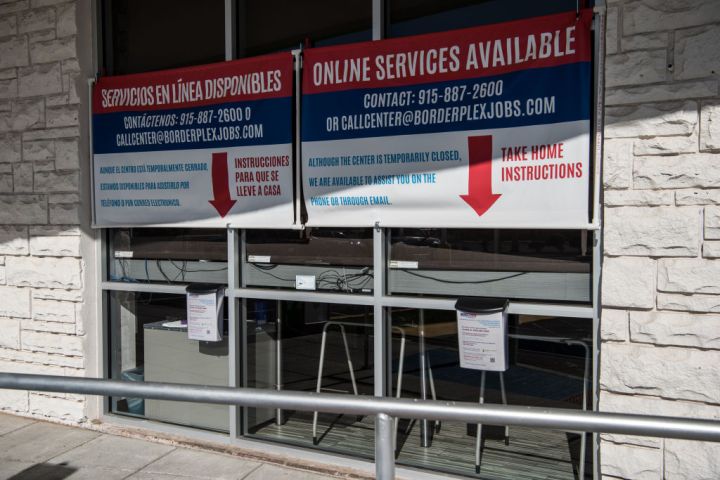 Unemployment assistance offices, like this one in El Paso, Texas, have been overwhelmed with claims. Cengiz Yar/Getty Images
COVID & Unemployment

Unemployment assistance offices, like this one in El Paso, Texas, have been overwhelmed with claims. Cengiz Yar/Getty Images

Millions of Americans have lost their jobs because of the coronavirus pandemic, and the expanded unemployment payments authorized by Congress have been critical in helping to soften the financial blow.

The most generous of those benefits are set to end soon, and lawmakers are debating if, and how, to extend or replace them.

The CARES Act passed in March authorized an extra $600 per week to be added to regular unemployment benefits. The reason the $600 figure was chosen is because that makes the average unemployment check, across the nation, about equal to the median pay for working Americans. Usual state unemployment checks typically cover around half of a worker’s former earnings. The same amount of money was given to everyone because antiquated computer systems in many states couldn’t handle anything more complex, and it’s worked, to an extent.

“It’s one of the most effective things we’ve seen from the CARES Act, but it’s not perfect,” said Heidi Shierholz, senior economist at the Economic Policy Institute, and former chief economist at the Department of Labor in the Obama administration.

“That extra $600 is getting a ton of money into the economy,” said Shierholz. For example, people who claim in Mississippi get an average of $813, up from $213. That substantial extra payment stops at the end of July.

Experts say there are more effective ways to cover lost wages and support the wider economy, but because unemployment computer systems can’t handle anything complex, other ways of structuring payments are unlikely to happen.

There’s been a long history of lack of investment in state IT systems, and many do not have the ability to customize payments based on previous earnings.  (Some states are reportedly recruiting COBOL coders out of retirement just to update systems running on the half-century old programming language enough to cope with existing unemployment claims.) Democratic Sen. Ron Wyden called it “bronze age technology” in a recent Senate Finance Committee hearing.

Some states, including New York, Michigan, and California are working on upgrading their IT systems.

One of the chief arguments against extending the $600 payments comes from some Republicans, who argue that the payments are so generous that they’re making it hard for employers to bring people back to work, where they may earn less.

The simplest reform to address that would be to make payments replace 100% of a worker’s lost wages. That means bespoke payments for every worker, which the software currently can’t compute.

Adding to the difficulties is the expanded eligibility for unemployment assistance among gig workers, the self-employed, and people who can’t produce a standard proof of previous income. Under the CARES Act they’re able to self-report, but if states want to be sure of replacing only 100% of lost income, they’d have to have a way to verify that, and currently most don’t.

That means replacing the $600 payments with a calculated payment for each individual claimant isn’t possible.

Democrats point out that ending the $600 payments suddenly at the end of July would create an income cliff, plunging millions into difficulty or poverty, so they are proposing either extending the payments until the end of the year, or introducing a phase out of the payments linked to economic conditions.

A series of automatic triggers could be built into future federal payments, so they drop by $100 each time a state’s unemployment rate falls by a certain percentage. Economists like Shierholz say that would allow the payments to remain in place long-term, instead of having a deadline like the end of July, or even the end of the year, when conditions may not be any better for job-seekers.

“One of the problems with this current policy is that policymakers put arbitrary end dates on it, and that’s crazy, particularly at a time like now when there’s so much uncertainty,” she said.

There is a precedent for automatic triggers. Extended payments, beyond the standard 26 weeks, are triggered when a state’s unemployment rate rises sharply under current law. Critics say the system doesn’t work well though, because the rate has to keep rising for the payments to continue. An unemployment rate that stays high, but doesn’t rise, can trigger the payments to turn off.

Another proposal, from the Trump administration, is to introduce a cash bonus for people who go back to work. That could take the form of a one-off payment for people who return to employment, to offset any drop in income compared to unemployment. Or workers could continue to receive a smaller “unemployment” payment even though they’re back at work.

Idaho is using some of the money from the CARES Act to pay return to work bonuses. Full-time employees can apply for up to $1,500, and part time workers can get up to $750. (The amounts vary depending on when they go back to employment.)

Again, there’s some precedent for wider one-off payments, as well as research into their effectiveness, as another part of the CARES Act authorised a $1,200 payment to most Americans earning under a certain threshold. People mostly used those to keep a roof over their heads, or pay down credit cards, according to research by economists at four different universities.

That means that although the payments may be helping people who need it, they are not giving a boost to the wider economy in the same way that a regular payment might.

“Unemployment benefits are a lot more effective at giving money to poorer people, who are going to spend it at a higher rate,” said Micheala Pagel, at Columbia Business School, and one of the study’s authors. Money given to people who need it gets spent on things like rent and groceries, rather than put into a savings account.

“The goal is to have wage growth at all income levels, and low unemployment, but it’s not that there is the perfect policy to do that and we are just not implementing it,” said Pagel.

“The policies are all trading off certain costs and benefits.”